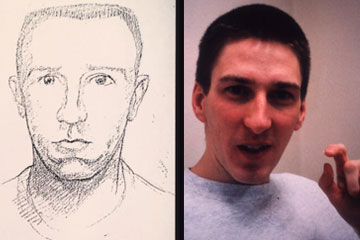 The FBI credits the accuracy of Timothy McVeigh's composite for his arrest.
Brad Markel/Getty Images

Forensic artists who have drawn their fair share of facial composites will probably confess an awkward truth about police sketches: They aren't very accurate. By one estimate, hand-drawn composites by trained artists are roughly 9 percent accurate in terms of producing a recognizable likeness to a suspect [source: Avril]. And as we mentioned previously, computer-generated composites statistically tend to be of even poorer quality than hand-drawn sketches, with around 5 percent accuracy [source: Avril].

And it's not necessarily a question of the forensic artists' skill. Even if Leonardo da Vinci were creating police sketches, accuracy issues would still crop up. The major roadblock to creating spitting images of suspects rests not in the forensic artist's hand, but the victim's or witness' memory retrieval processes. If you think about a human face as a chess set, our brains don't capture that image as a collection of knights, pawns and other discrete pieces, which would rely on our recall memory -- memory that requires no priming, such as being shown a picture of someone and asked to identify it. Instead, our brains summon our recognition memory, which relies on cues, such as spotting someone on the street, in order to form the associations that allow us to put, for instance, names with faces. For that reason, we might all know what Brad Pitt looks like and easily identify him strolling down the street, but we'd have a much harder time describing his appearance from scratch.

The violence, stress and trauma of being victim to a crime, as well as the time lapse between the crime and the police sketch interview only muddies recollections [source: Raeburn]. Depending on the circumstances, a criminal's face may never make it through the brain's memory-making process. To store a memory lock-tight, the brain must encode a face, consolidate all of the information about that face (eyes, nose, facial hair, etc.) and catalog it alongside similar-looking faces already stored away upstairs. Cementing that memory for later retrieval during an interview further entails retracing neural pathways by thinking about that face, which might be the last thing a frightened victim wants to do. How easy is it to complete that mental workout in the time it takes to get mugged at gunpoint? Not very.

So why spend time and resources on police sketches if they're neurologically doomed for inaccuracy? Forensic artists argue that the role of police sketches isn't to construct a perfect portrait of the perpetrator. The point of police sketches is to publicize crimes, attract leading clues and get the public looking out for suspicious persons [source: Lichtman]. That's why the artists will highlight standout features -- a tattoo, scar, facial hair -- that might jump out at passersby. After all, happenstance led an Oklahoma State Trooper to pull over Timothy McVeigh less than two hours after the Oklahoma City bombing. But it was that composite sketch distributed by the FBI that eventually tipped off the law enforcement officers that they had a most-wanted criminal on their hands.

The U.S. Department of Justice is funding research to test whether a suspect's mug shot can be derived from his DNA. The idea here is that you could take a blood or hair sample left at the scene of a crime and run a DNA test that reveals the criminal's eye color, hair color and skin color. Instead of relying solely on eye witness accounts, which are often inaccurate, DNA phenotyping could provide some scientifically proven signposts.

The field remains in its infancy, however, and doesn't threaten to put any forensic artists out of a job just yet. [source: Enserink]