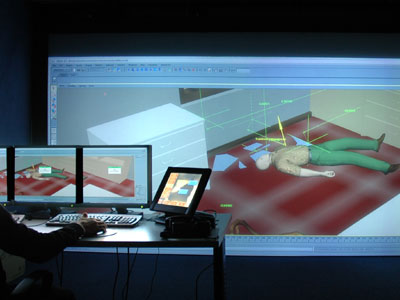 A forensics laboratory here is using a sophisticated computer system to reproduce crime scenes, recreating everything from the path of a bullet to the movement of a corpse with startling realism.
Image courtesy Silicon Graphics, Inc.

Police investigators and forensics specialists face challenging conditions when examining a crime scene. Often, the site of a crime can only be preserved for a short time, particularly if it's in a public area. Investigators must gather as much information as quickly as possible while doing their best not to disturb the scene itself. Also, crime photographers have to shoot scenes from multiple angles while attempting to preserve a sense of scale to ensure the pictures are meaningful -- both to investigators and to a future courtroom.

Today, some police forces are using virtual reality technology to capture and recreate a crime scene digitally. Several companies have developed numerous methods investigators can use when at the scene of a crime. Some replicate crime scenes with computer graphics similar to what you might find in a virtual reality video game. Other systems assemble photographs into a 360-degree virtual environment just like the photographic walkthroughs you may have seen on hotel and real estate Web sites. Police forces around the world have discovered that, if used properly, virtual environments can help the investigation process from its earliest stages all the way to a courtroom conviction.

Proponents of virtual reality suggested a forensics application for virtual environments in the initial days of the VR media blitz. Back in the '90s, virtual reality was a buzzword found in everything from news reports to Saturday morning cartoons. But as the public discovered that the actual progress in VR technology wasn't quite as advanced as the media seemed to suggest, interest waned and VR became known as a fad. Fortunately, many researchers, developers and computer scientists continued to work in the field, laying the groundwork for useful applications of VR technology.

In this article, we'll look at the two most common approaches using VR technology in crime scene recreation, as well as its advantages and disadvantages. We'll also look at the different stages in an investigation where a virtual crime scene can come in handy.­

Many VR rendering programs start with a two-dimensional set of blueprints or sketches like this one.

The first virtual crime scenes were created in computer models. Investigators took careful measurements at a crime scene, including the dimensions of the scene itself and the relationship between all the objects inside the scene. For example, at a murder scene in a house, an investigator measured the dimensions of the room, the position of the body and the location of any other related information, like weapons or blood. Often, investigators used laser distance meters or a total station (a surveyor's tool) to ensure accurate measurements. Crime photographers took pictures of the scene from multiple angles. After the initial crime scene investigation, the investigator returned to the police station.

At the station, a computer operator took the measurements gathered by the investigators and entered them into a computer program. The program then rendered a three-dimensional space using that information.

Some programs required human intervention to make the spaces accurate -- one particular approach required a programmer to adjust the height of a room manually. The programmer used a Computer Assisted Design (CAD) program to adjust the computer model, create furniture or insert the figure of a body. Some early programs also included a library of common objects, like file cabinets or desks, to make the process a little faster and, therefore, less expensive.

Time and money were the two biggest obstacles to making virtual crime scenes a useful tool. The early programs needed a highly skilled computer programmer or graphics designer to make the environments convincing enough to be useful and immersive -- in other words, they didn't give the viewer a sense of presence within the virtual scene. Police forces needed software that had a much less steep learning curve and automated as much of the process as possible.

Today, several software companies offer products that automatically build rooms based on either basic measurements or a two-dimensional room plan. Most of these programs also include extensive object and texture (overlay graphic) libraries, allowing the user to customize the virtual environment and make it as accurate a representation of the real crime scene as possible. Most of these programs can even include the flight path of a bullet (as previously determined by investigators using standard forensics techniques).

The advantage to the improved virtual environment is that once it's rendered, users can now view the scene from any angle, including from vantage points that are difficult to access in the real world. By looking at the scene from different perspectives, investigators have more information that can help them accurately determine the course of events at a crime scene. Some programs also allow a user to add in animations, allowing investigators to view their theories in action.

If the program supports video output like a head-mounted display, the user can experience a strong sense of immersion, which can help witnesses recall more details or allow investigators to check lines of sight.

But modern virtually rendered environments have disadvantages. The biggest disadvantage is the need for an employee who has enough technical savvy to work with the program -- even with programs that automatically build environments, a user often has to make adjustments. Another disadvantage is that virtual environments are rarely perfect copies of the real crime scene. As a result, investigators or witnesses may become distracted by the imperfect simulation and miss important details.

In the next section, we'll look at a different method of constructing a virtual crime scene.

No Bones About It

The Hollywood version of crime scene investigation is an exaggeration and oversimplification of reality. Shows like "CSI" and "Bones" sometimes show investigators looking at amazing three-dimensional holograms of bodies or buildings, rotating them in real space without any recognizable input device. In reality, police are much more likely to use a simple laptop computer and a mouse to explore a virtual scene. 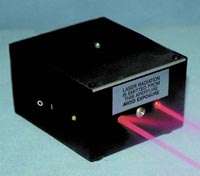 Why Use a Virtual Environment?

Police can use VR simulations of crime scenes to evaluate a witness’ line of sight. In this example, the witness’ point of view is partially obscure, which might mean his statement is unreliable.

Why are police departments investing thousands of dollars in this sort of technology in the first place? For years, investigators worked from sketches, photographs and scale models to solve crimes. Why bring virtual environments into the process?

The most important reason is that investigators can preserve a facsimile of the crime scene indefinitely. Some crime scenes are in areas that receive a lot of public traffic and can't be cordoned off for an extended length of time -- the crimes scene clean up crew must return the scene to its normal state. By creating a virtual copy of the scene, investigators can revisit it whenever they want without inconveniencing anyone.

The applications for virtual environments in crime investigations include:

As companies develop user-friendly applications, we'll likely see police use VR technology more often. Several forces have expressed interest in using the technology to explore cold cases, possibly leading to an arrest decades after the initial crime. Many others are already using the technology to share investigation results with officers from different forces.

To learn more about virtual crime scene investigation and related topics, check out the links on the next page.