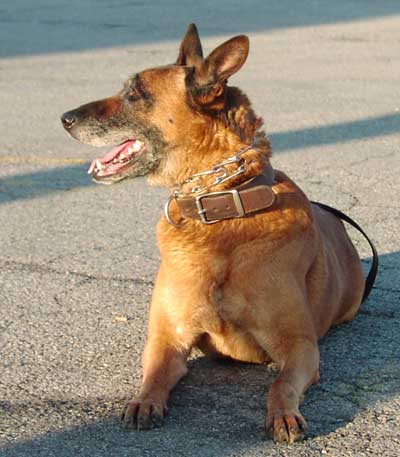 Breston's consistently high level of training provides good evidence that his behavior, in any circumstance, was appropriate.

If a police dog injures someone or causes damage, the police department could be liable for those damages. The same could be said for police officers themselves. There isn't a separate set of standards for using a police dog to forcefully capture or restrain a suspect. That falls under the same standards that are used to decide if any police force was used appropriately. The use of force is justified depending on three factors:

Typically, a court will find that the use of canine force was justified if the suspect was armed, the suspect hadn't yet been searched by officers, or if the suspect was fleeing and was suspected of a serious crime. An impressive training record can also help prove the dog used only the force that was absolutely necessary. This is where a European training certificate, such as Breston's KNPV-I Met Lof Award, can be extremely valuable. "The first thing that a defense attorney is going to ask for is the dog's training records," said Officer Smith. "I can show that not only was his training kept up in this country, but he achieved an internationally recognized training, and passed."

The use of police dogs is increasing as police departments realize that a well-trained dog/handler team actually reduces liability, rather than increasing it. Every time a suspect runs away or fights police officers, the chase and struggle can lead to injuries and lawsuits against the department. The use of a K-9 unit can often keep a suspect from resisting at all, and can often end the situation before it escalates to the point where someone might get injured.

What Is Martial Law, and Could the U.S. Declare it Due to COVID-19?