The Right Dog for the Job 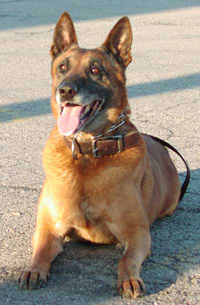 Dogs come in an huge variety of shapes and sizes, and not every breed of dog is suited for police work. There probably aren't any police Lhasa apsos in the world. The majority of police dogs in the world are German shepherds, although Labrador retrievers and several other breeds (like Breston, a Belgian Malinois, pictured at right) are sometimes used, depending on the specific tasks they will be needed for. The key attributes of a successful police dog are intelligence, aggression, strength, and sense of smell. Most police dogs are male, and are frequently left unneutered so that they maintain their natural aggression. This aggression must be kept in check with thorough and rigorous training.

Police departments obtain dogs from a variety of sources. Some are donated by their original owners. However, more police departments are realizing the importance of using dogs that have been specifically bred and raised for police work. Dogs imported from Europe have several advantages over American-bred dogs. In Europe, breeding standards are very strict. Dogs are measured against a core set of physical attributes, and are only bred if they meet these criteria. In addition, European police dog agencies are internationally renowned. Before a dog even comes to the United States, it has already gone through rigorous training and achieved an international certification. Breston, for example, is from Holland, where he graduated with honors from the Royal Dutch Police Dog Association.

The drawback to using European dogs is the cost. It costs an average of $8,500 to purchase and ship a dog from Europe to a U.S. police department. However, in many cases, police dogs "pay for themselves." Breston was purchased using money seized from drug dealers, many of whom were busted with the help of Breston's predecessor, Gringo. Gringo was a German shepherd who retired from police service in 1998. When Breston retires later this year, his replacement, who will probably come from Hungary, will also be paid for using seized drug money.

Police dogs are the best of the best, and their handlers are very carefully chosen, too. The police dog and his handler together make up a K-9 unit.

Only the most dedicated officers are considered for K-9 units. They must have exemplary records, plenty of arrests with convictions, an outgoing, energetic personality, and strong physical conditioning. A K-9 officer often puts in 60 hours each week. The pay is good, but the schedule is grueling, and there's no backing out. A K-9 officer can't decide a month or a year into the job that he or she is tired of it. A police dog's career usually lasts about six years, and the handler is in it for the long haul.

Next, let's take a look at what police-dog training entails.

In the Line of Duty

Read about the final heroic moments of Aron, a police dog near Nashville who gave his life to save his handler, at http://www.hendersonville-pd.org/aron.html.