A Day In the Life of a Police Dog 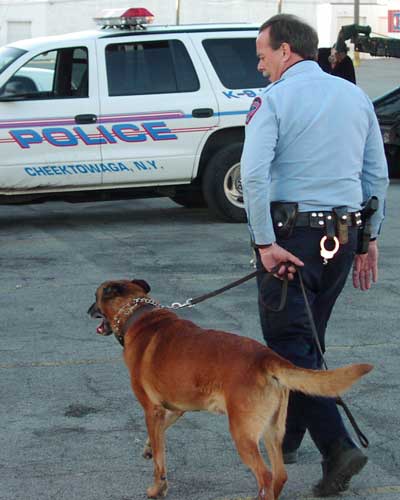 Breston and Officer Smith head back to their K-9 Unit SUV to answer a call.

Police dogs live with their partners. A K-9 unit is a team that stays together 24 hours a day, seven days a week.

On a typical morning, Breston and Officer Smith wake up early and assist other local K-9 units doing drug sweeps at schools. These searches send a strong message that drugs won't be tolerated at schools, and anyone who brings them will get caught. The K-9 unit also conducts drug searches at local businesses, at the owner's request.

On some days, Officer Smith and Breston have to attend court, either to give testimony against a suspect they caught, or to defend themselves against someone who claims Breston unfairly injured them. As we'll see later, although these claims are made frequently, a police dog's training record is strong evidence that excessive force was not used.

By the time 4 p.m. rolls around, the K-9 unit has already had a busy day. But their actual patrol shift lasts from 4 p.m. to midnight, the busiest time, and the shift when police departments want their dogs out on the streets.

Like most police work, each eight-hour shift involves lots of waiting, followed by brief periods of action when a call comes in on the radio. When a call comes in, the K-9 unit rolls out in a special police car outfitted with a space in the back for the dog. In Breston's case, he gets to ride around in an SUV, with one separate compartment for Breston and one for arrested suspects. The unit might have to do something as mundane as call a tow-truck to remove an abandoned car, or they might be asked to track down a suspect that has fled the scene of a burglary. Most police dogs are cross-trained, so they can track people in addition to drugs. They learn to scent on the ground, for the scent trail that a person leaves, and in the air, for the scent "cone" that flows downwind from a person when he or she is nearby. Air scenting is important, because that way a dog can sense if a suspect has circled back around to ambush the officer.

After their eight-hour shift has ended, it's back home for a good night's sleep. As you can see, that's a busy schedule, and that doesn't even include training days. Every week to two weeks, the K-9 unit will spend eight hours training, helping to keep the dog's skills sharp.

The Dogs Have It

While a police dog is on a drug sweep, he can cover a lot of area very quickly. It would take human officers 10 times as long to search the same area, and they'd still never find everything a dog can sniff out.