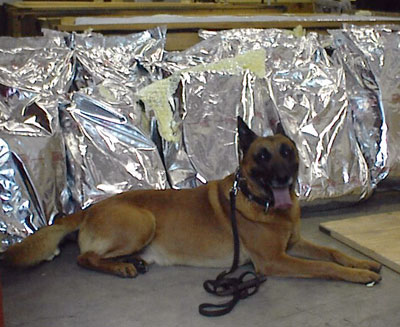 Breston uncovered a shipment of marijuana in heat-sealed Mylar bags, inside plastic-lined crates sealed with foam sealant, inside a closed storage garage.

People often wonder if dogs sniff out hidden drugs because they want to eat them, or because they're addicted to drugs themselves. In fact, the dogs have absolutely no interest in drugs. What they're actually looking for is their favorite toy. Their training has led them to associate that toy with the smell of drugs.

The toy used most often is a white towel. Police dogs love to play a vigorous game of tug-of-war with their favorite towel. To begin the training, the handler simply plays with the dog and the towel, which has been carefully washed so that it has no scent of its own. Later, a bag of marijuana is rolled up inside the towel. After playing for a while, the dog starts to recognize the smell of marijuana as the smell of his favorite toy. The handler then hides the towel, with the drugs, in various places. Whenever the dog sniffs out the drugs, he digs and scratches, trying to get at his toy. He soon comes to learn that if he sniffs out the smell of drugs, as soon as he finds them he'll be rewarded with a game of tug-of-war.

A story recounted in "Dogs On the Case," by Patricia Curtis, tells of a drug dog that was a little too eager for a game of tug-of-war. While walking along a line of cars waiting to enter the United States from Mexico, one of the dogs alerted to the smell of drugs, slipped her leash, and ran down the line of cars. Before her handler could find her, she trotted back into view, holding a large brick of marijuana in her jaws. Although the border patrol had no way to tell which car the drugs came from, the dog still got her tug-of-war. She did her job, and the drugs were off the street.

When a police dog finds what he's sniffing for, he lets his handler know it's there by giving the alert signal. Drug dogs use an aggressive alert -- they dig and paw at the spot where they smell the drugs, trying to get at the toy they think is waiting there.

However, there are some specialties where an aggressive alert would be bad news. If a dog searching for a bomb digs and scratches at it when he finds it, the results could be disastrous. In these cases, a passive alert is used. A good example of passive-alert dogs are the beagles used by the U.S. Department of Agriculture to sniff out produce that isn't allowed to enter the country. The Beagle Brigade, as they're affectionately called, sniffs people's luggage while they wait in customs lines at airports and border crossings. Because no one wants a dog digging at their belongings, the USDA beagles have been trained to simply sit down when they smell fruits or vegetables.