Why do we need warriors? 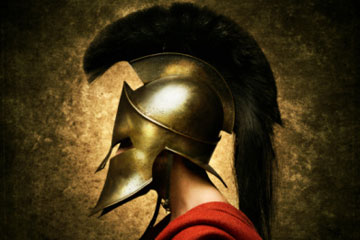 Yesterday's warrior was a Spartan. Today's warrior can be anything from an entrepreneur to an activist.
Colin Anderson/Getty Images

The modern English word "warrior" comes from the 12th-century French word "werreieor," which means "one who wages war." But the idea that a special class of people should fight on behalf of their tribes, cities or nations dates back much further in history.

The ancient Greek poet Homer, who composed his epic "The Iliad" around the 8th century B.C., celebrated the martial skill and ferocious bravery of the Trojan hero Hector, who defended his city and met Achilles in a fight that he was doomed by divine intervention to lose. The 5th century B.C. Chinese general and philosopher Sun-Tzu wrote a military manual, "The Art of War," in which he described both the tactical knowledge that warriors needed, and the moral and spiritual principles likely to lead to victory against enemies. Ancient Rome produced a class of professional military men, including Julius Caesar, who led the armies that built a mighty empire. That military lineage continues into the present, with the U.S. military's ranks of volunteer soldiers, pilots, marines and sailors, who stand prepared to go to war in defense of their country and its allies.

Ancient cultures needed a special class of warriors because waging war was a complicated and difficult task, both from a practical and moral standpoint. The 17th-century English philosopher Thomas Hobbes said that humans first formed civilization out of fear that without laws and authority, they would all murder each other. Yet to preserve that order, civilized societies also have needed people capable of defending them from outside enemies, as well as fighting to obtain land or resources that the societies needed.

Ironically, to do their jobs, these special citizens have to go outside the normal rules of society and use violence -- often to kill. To compensate for this obvious contradiction, many societies not only train warriors to use combat skills, but indoctrinate them with elaborate codes of conduct that carefully spell out when violence should be used and when it should not be used. In enlightened societies, warriors are also taught to follow international rules to curb unnecessary cruelty and killing, even when it means disobeying an order from a superior.

Great warriors are often lauded by society. We learn to admire them in part because our popular culture -- songs, war correspondents' newspaper accounts, TV shows and movies -- teach us to do so, according to historian Andrew Huebner, author of "The Warrior Image: Soldiers in American Culture from World War II to the Vietnam Era." Huebner says that such media portrayals of military heroes focus upon sympathy and identification with the sacrifices of those serving in combat, rather than the cause they're fighting for [source: Huebner].

But perhaps we also laud the warrior for the principles he/she represents. For example, in modern times, the term "warrior" also has taken on a non-military meaning, referring as well to people who develop the same attributes needed for warfare -- preparation, discipline, loyalty, bravery and a willingness to take orders and work with others -- and apply them to challenges in civilian life, from building a business or solving a societal problem, to winning religious converts.