by Mark Mancini Feb 11, 2020
Samurai were part an elite class of Japanese warriors who fought to defend their medieval lords. Digital image courtesy of the Getty's Open Content Program

In the Land of the Rising Sun, samurai movies are a century-old tradition. Pop culture frames the swordsmen as near-mythic figures. We're told samurai belonged to an elite class of Japanese warriors who always fought fair, loyally defended their medieval lords and hewed to a unifying honor code known as "bushido."

Scriptwriters thrill in pitting them against dark-robed ninja assassins. A fearsome mercenary, the standard movie ninja carries razor-sharp throwing stars and has mastered a unique martial art called "ninjutsu." Things get even hairier when the director gives him supernatural powers like flight or invisibility.

Magical talents aside, just how accurate is our modern outlook on samurai and ninjas? To find out, we interviewed three historians — and learned some surprising things in the process.

Japanese history is broken down into eras and periods. Particularly relevant to our discussion are the Sengoku Period of 1467 to 1603 and the successive Tokugawa (or "Edo") Period that lasted until 1868.

The Tokugawa Period takes its name from a shogun family that assumed control of Japan in 1603. Shoguns were hereditary military dictators who'd been ruling the country since 1192. On paper, they served Japan's emperors. Yet in practice, these figures were far more powerful and it was they who truly called the shots.

Earlier centuries had been plagued by constant warfare. But things stayed calm under the Tokugawa regime. International trade was tightly regulated and the shoguns took pains to discourage political squabbling.

This was also a time when Japan redefined its relationship with samurai. As Thomas Conlan — a professor of East Asian history at Princeton University — told us via email, "The samurai became an identifiable social status only in the 1590s. Before then, all of society was militarized and there was no distinction between peasants and warriors."

Such ambiguity didn't sit well with General Toyotomi Hideyoshi. A game-changing warlord, he issued a nationwide "Sword-Hunt Edict" in 1588. This prohibited farmers from owning weapons of any sort. Under the new rules, only samurai — and samurai alone — could bear arms.

Hideyoshi's reforms carried over into the Tokugawa Period. In effect, they laid the groundwork for a rigid, hereditary caste-like system that put samurai above artisans, peasants and merchants. By then, the feudal wars that defined the Sengoku Period had long passed. With no battles to wage, the samurai were given bureaucratic and administrative roles.

In late 1863, a photographer captured a delegation of four samurai from the Satsuma clan who went to Yokohama to discuss the murder of an English merchant, as well as to normalize relations between their clan and British diplomats.
Digital image courtesy of the Getty's Open Content Program

Hindsight has a way of glamorizing warfare. Just ask Sarah Thal, a historian of "early modern and modern Japan" who teaches at the University of Wisconsin-Madison.

"During the long peace of the Tokugawa era, when samurai came to work more as administrators than as fighters, many romanticized the earlier times of war (in the 12th to 16th centuries for instance) when samurai actually fought," she says in an email.

The last shogun was overthrown in 1868. Afterward, Japan entered its reformative Meiji Period, which embraced industry and centralized governance. Historically, the samurai had served feudal lords and enjoyed special privileges. But all that soon changed.

"The official status of samurai was abolished in 1869 and their privileges revoked in the early 1870s," Thal explains. "With the abolition of their lords' domains, many former samurai were out of work, unable to get jobs in the new government.

"In the 1890s, they, their children, and many Japanese began trying to define a 'Way of the Samurai' that operated both as a nostalgia for the supposedly moral, good old days and as a critique of the modernizing trends of the time," Thal says.

Enter Nitobe Inazō. A diplomat and author, he radically transformed the way future generations would look at samurai. In 1899, Inazō published an influential book called "Bushido: The Soul of Japan." The text presents itself as an introduction to "bushido." According to Inazō, this was the traditional, universal code of conduct observed by real-world samurai.

Except it wasn't. "The so-called 'samurai code' of bushido did not exist in the [Sengoku] heyday of samurai warfare," Kapur notes. The word "bushido" itself wasn't coined until the peaceful Tokugawa Period.

But it's from "Bushido: The Soul of Japan" that we get some of the most pervasive myths about samurai values and behavior. "Samurai were not all the moral, noble, well-to-do spiritual swordsmen depicted in film," Thal says. "They did not have a single, coherent moral code that defined how they thought and acted."

"Just like warriors anywhere else," adds Kapur, "samurai raped and looted and pillaged and were constantly betraying their lords."

While samurai were real warriors in Japanese history, the stories of mercenaries known as ninjas are, well, kind of fabricated.
tunart/Getty Images

The Lowdown on Ninjas

Speaking of misconceptions, it's time to talk ninjas. Supposedly, they were sellswords who performed covert operations, gathered intelligence and — last, but not least — assassinated people in the cover of darkness.

The neighboring Iga and Kōka regions in southeastern Japan are usually cited as the training grounds where all ninjas honed their deadly skills. Sometimes, you'll even hear that ninjas formed a hereditary class or caste, not unlike the samurai.

Scores of Japanophiles, movie buffs and martial artists have embraced ninja lore. Every year, some enthusiasts get dressed up in jet-black garb to celebrate "Ninja Day" Feb. 22.

Not to rain on anyone's parade, but the storied mercenaries are ... kind of fabricated.

"Ninja as we know them today did not actually exist," Kapur says. The word ninja, he says, comes from "two Chinese characters meaning 'stealth' and 'man' (忍者)." By the way, "shinobi" — and not "nin" — is how most Japanese-speakers pronounce the first character.

Medieval Japan had its share of folks who snuck into castles and embraced undercover warfare. Historical records show samurai weren't above such tactics. "We have a lot of documents about these activities, but [they] were carried out by a variety of people," Kapur says. "There was never any specialized class of assassins living in hereditary clans and selling their services for hire. This is pure myth which, like the myths about the samurai, was created during the long and peaceful Edo period."

Despite this, ninja fables are nothing new. "Even by the 18th and 19th centuries, ninja had become a pop culture phenomenon in Japan," Thal says. "So there were all sorts of fantastic, fictional depictions in art, literature, drama and the like."

Now That's Interesting
George Lucas has said that one of his inspirations for the original "Star Wars" movie was a 1958 Japanese samurai film called "The Hidden Fortress." Another classic samurai picture, 1961's "Yojimbo," was loosely adapted into the Sergio Leone western "A Fistful of Dollars." 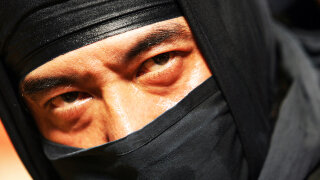 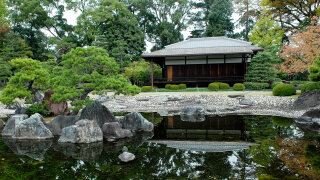 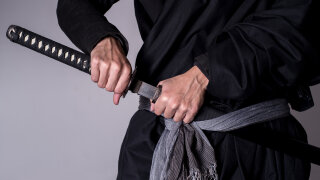 What Sets the Katana Apart From Other Swords?

Botflies Are Nasty Parasites That Get Under Your Skin
February 20, 2020

How the U.S. Capitol's Design Was Chosen By Public Competition
February 20, 2020

The Watery World of the Monster Anaconda
February 20, 2020