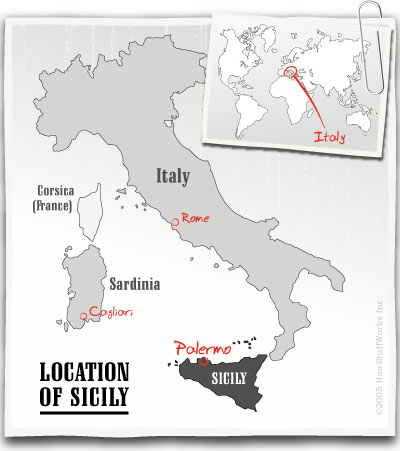 The current structure of the Mafia took centuries to develop. It all began on the island of Sicily. Although there are major organized crime groups from other parts of Italy, the Sicilian Mafia is generally considered to be the blueprint for all other Mafia organizations.

Several unique factors contributed to the development of organized crime on Sicily. The island is located at an easily accessible and strategically important place in the Mediterranean Sea. As a result, Sicily was invaded, conquered and occupied by hostile forces many times. This led to an overall distrust of central authority and codified legal systems. The family, rather than the state, became the focus of Sicilian life, and disputes were settled through a system in which punishment was dealt beyond the limits of the law.

In the 19th century, the European feudal system finally collapsed in Sicily. With no real government or functioning authority of any kind, the island quickly descended into lawlessness. Certain landowners and other powerful men began to build reputations and eventually came to be seen as local leaders. They were known as capos. The capos used their power to extract tributes from farmers under their authority (much like the feudal lords before them). Their authority was enforced through the threat of violence. Their criminal activities were never reported, even by the victims, because of the fear of reprisal. This was the beginning of the Sicilian Mafia.