More on the History of the Kiss 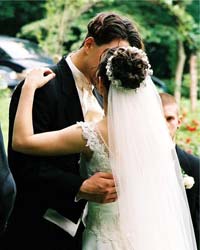 The kiss at the end of a wedding probably comes from ancient Roman kissing traditions.
Image courtesy Paul Anderson/MorgueFile

Kissing played a role in the early Christian Church. Christians often greeted one another with an osculum pacis, or holy kiss. According to this tradition, the holy kiss caused a transfer of spirit between the two people kissing. Most researchers believe the purpose of this kiss was to establish familial bonds between the members of the church and to strengthen the community.

Until 1528, the holy kiss was part of Catholic mass. In the 13th century, the Catholic Church substituted a pax board, which the congregation kissed instead of kissing one another. The Protestant Reformation in the 1500s removed the kiss from Protestant services entirely. The holy kiss doesn't typically play a role in modern Christian religious services, although some Christians do kiss religious symbols, including the Pope's ring.

Although few religions currently incorporate the holy kiss, kissing remains prevalent throughout Western culture. Nowadays, people kiss in many contexts and for many reasons.

But not all kisses have been happy events. Works of literature like "Romeo and Juliet" have portrayed kisses as dangerous or deadly when shared between the wrong people. Some folklorists and literary critics view vampirism as symbolic of the physical and emotional dangers that can come from kissing the wrong person.

Most cultures around the world kiss today, but many have different views about when and where kissing is appropriate. In the 1990s, several news articles reported a trend of young people kissing in public in Japan, where kissing had traditionally been viewed as a private activity.

Next, we'll look at the anatomy and physiology behind kissing.

One of the Western world's most famous kisses is the kiss Judas Iscariot used to betray Jesus shortly before his crucifixion. This kiss had an influence on Christian spiritual practices. Early church sects omitted the holy kiss - or abstained from kissing entirely - on Maundy Thursday. Maundy Thursday is the Thursday before Easter and the day used to commemorate the Last Supper, after which Judas betrayed Jesus in the Garden of Gethsemane.