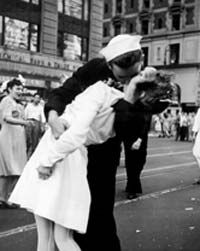 When you really think about it, kissing is pretty gross. It involves saliva and mucous membranes, and it may have historical roots in chewed-up food. Experts estimate that hundreds or even millions of bacterial colonies move from one mouth to another during a kiss. Doctors have also linked kissing to the spread of diseases like meningitis, herpes and mononucleosis.

Yet anthropologists report that 90 percent of the people in the world kiss. Most people look forward to their first romantic kiss and remember it for the rest of their lives. Parents kiss children, worshippers kiss religious artifacts and couples kiss each other. Some people even kiss the ground when they get off an airplane.

So how does one gesture come to signify affection, celebration, grief, comfort and respect, all over the world? No one knows for sure, but anthropologists think kissing might have originated with human mothers feeding their babies much the way birds do. Mothers would chew the food and then pass it from their mouths to their babies' mouths. After the babies learned to eat solid food, their mothers may have kissed them to comfort them or to show affection.

In this scenario, kissing is a learned behavior, passed from generation to generation. We do it because we learned how to from our parents and from the society around us. There's a problem with this theory, though: women in a few modern indigenous cultures feed their babies by passing chewed food mouth-to-mouth. But in some of these cultures, no one kissed until Westerners introduced the practice.

Other researchers believe instead that kissing is instinctive. They use bonobo apes, which are closely related to humans, to support this idea. Bonobos kiss one another frequently. Regardless of sex or status within their social groups, bonobos kiss to reduce tension after disputes, to reassure one another, to develop social bonds and sometimes for no clear reason at all. Some researchers believe that kissing primates prove that the desire to kiss is instinctive.

­ Several other animal species have behaviors that resemble kissing. Many mammals lick one another's faces, birds touch one another's bills and snails caress one another's antennae. In some cases, the animals are grooming one another rather than kissing. In others, they're smelling scent glands that are located on faces or in mouths. Regardless, when animals touch each other in this way, they're often showing signs of trust and affection or developing social bonds.

­ Scientists don't entirely agree on whether kissing is learned or instinctive. There's support for both arguments, just as there's support for the different theories of why people started doing it in the first place. See the next page to learn more.

Do we have to hear the kissing part?

Modern research suggests that just about every culture on the planet kisses. However, anthropologists and ethnologists have described a few cultures in Asia, Africa and South America that do not kiss at all. Some of these cultures view kissing as disgusting or distasteful. However, other researchers point out that these societies may view kissing as too private to discuss with strangers. In other words, they might kiss but not talk about it.

The Effects of Kissing 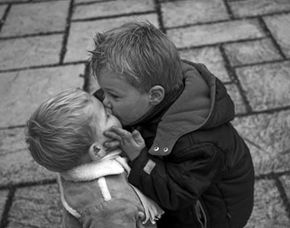 While researchers aren't exactly sure how or why people started kissing, they do know that romantic kissing affects most people profoundly. The Kinsey Institute describes a person's response to kissing as a combination of three factors:

These factors play a part in all kisses, not just those that are romantic in nature. In other words, when a mother kisses her child's bruise to make it feel better, psychological, physical and social factors play a part in both people's reactions. The same is true when friends kiss as a greeting, worshippers kiss religious symbols or siblings kiss and make up after an argument. Even though some kisses are platonic and others are romantic, they generally have one thing in common - they are inspired by and tend to inspire feelings we think of as positive.

Regardless of exactly how people got the idea to kiss or what they mean when they do it, anthropologists are pretty sure that people started kissing thousands of years ago. We'll look at the history of kissing in more detail next.­

What an incredible smell!

People in some cultures rub one another's noses or cheeks rather than, or in addition to, kissing. Anthropologists theorize that this "Eskimo kiss" grew from people smelling one another's faces much the way animals do.

The History of the Kiss 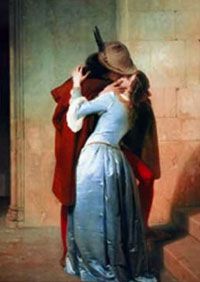 This painting, called "Kiss," was painted by Francesco Hayez in the 19th century. Before the 19th century, kisses did not appear frequently in Western artwork.
Image courtesy Amazon

Historians really don't know much about the early history of kissing. Four Vedic Sanskrit texts, written in India around 1500 B.C., appear to describe people kissing. This doesn't mean that nobody kissed before then, and it doesn't mean that Indians were the first to kiss. Artists and writers may have just considered kissing too private to depict in art or literature.

After its first mention in writing, kissing didn't appear much in art or literature for a few hundred years. The Indian epic poem "Mahabharata" describes kissing on the lips as a sign of affection. The "Mahabharata" was passed down orally for several hundred years before being written down and standardized around 350 A.D. The Indian religious text "Vatsyayana Kamasutram," or the "Kama Sutra," also describes a variety of kisses. It was written in the 6th century A.D. Anthropologists who believe that kissing is a learned behavior theorize that the Greeks learned about it when Alexander the Great invaded India in 326 B.C.

There aren't many records of kissing in the Western world until the days of the Roman Empire. Romans used kisses to greet friends and family members. Citizens kissed their rulers' hands. And, naturally, people kissed their romantic partners. The Romans even came up with three different categories for kissing:

The Romans also started several kissing traditions that have lasted to the present day. In ancient Rome, couples became betrothed by kissing passionately in front of a group of people. This is probably one reason why modern couples kiss at the end of wedding ceremonies. Additionally, although most people today think of love letters as "sealed with a kiss," kisses were used to seal legal and business agreements. Ancient Romans also used kissing as part of political campaigns. However, several "kisses for votes" scandals in 18th century England led - in theory - to candidates kissing only the very young and very old.

Kissing under the Mistletoe

Today, some people seem to spend the holiday season waiting under the mistletoe in the hopes of kissing whoever passes by. But until the 1400s, kissing under mistletoe was a big commitment. Such kisses often meant that a couple was engaged.

More on the History of the Kiss 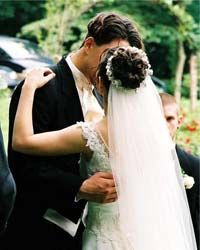 The kiss at the end of a wedding probably comes from ancient Roman kissing traditions.
Image courtesy Paul Anderson/MorgueFile

Kissing played a role in the early Christian Church. Christians often greeted one another with an osculum pacis, or holy kiss. According to this tradition, the holy kiss caused a transfer of spirit between the two people kissing. Most researchers believe the purpose of this kiss was to establish familial bonds between the members of the church and to strengthen the community.

Until 1528, the holy kiss was part of Catholic mass. In the 13th century, the Catholic Church substituted a pax board, which the congregation kissed instead of kissing one another. The Protestant Reformation in the 1500s removed the kiss from Protestant services entirely. The holy kiss doesn't typically play a role in modern Christian religious services, although some Christians do kiss religious symbols, including the Pope's ring.

Although few religions currently incorporate the holy kiss, kissing remains prevalent throughout Western culture. Nowadays, people kiss in many contexts and for many reasons.

But not all kisses have been happy events. Works of literature like "Romeo and Juliet" have portrayed kisses as dangerous or deadly when shared between the wrong people. Some folklorists and literary critics view vampirism as symbolic of the physical and emotional dangers that can come from kissing the wrong person.

Most cultures around the world kiss today, but many have different views about when and where kissing is appropriate. In the 1990s, several news articles reported a trend of young people kissing in public in Japan, where kissing had traditionally been viewed as a private activity.

Next, we'll look at the anatomy and physiology behind kissing.

One of the Western world's most famous kisses is the kiss Judas Iscariot used to betray Jesus shortly before his crucifixion. This kiss had an influence on Christian spiritual practices. Early church sects omitted the holy kiss - or abstained from kissing entirely - on Maundy Thursday. Maundy Thursday is the Thursday before Easter and the day used to commemorate the Last Supper, after which Judas betrayed Jesus in the Garden of Gethsemane.

The Anatomy of a Kiss 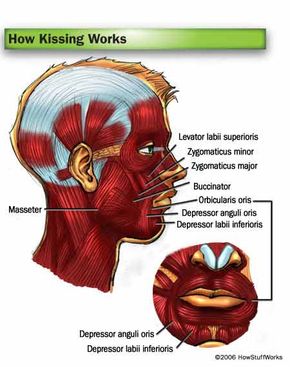 Most people think about what to do when kissing another person, but fewer ponder all the technical details behind it. No matter who you're kissing or why, the basic kiss relies heavily on one muscle - the orbicularis oris, which runs around the outside of your mouth. Your orbicularis oris changes the shape of your mouth while you talk, and it puckers your lips when you kiss.

But orbicularis oris is really just the tip of the iceberg. About two-thirds of people tip their heads to the right while kissing. Scientists believe this preference starts before we're born, when we tip our heads to the right in the womb. So muscles in your head, neck and shoulders tilt your head so your nose doesn't collide with your partner's nose.

In addition, the rest of the muscles in your face and head also play a part in a more involved kiss. For example:

Anyone who has ever been kissed knows that the sensations involved aren't confined to the mouth. Your facial nerve carries impulses between your brain and the muscles and skin in your face and tongue. While you kiss, it carries messages from your lips, tongue and face to your brain to tell it what's going on. Your brain responds by ordering your body to produce:

When you kiss, these hormones and neurotransmitters rush through your body. Along with natural endorphins, they produce the euphoria most people feel during a good kiss. In addition, your heart rate increases and your blood vessels dilate, so your whole body receives more oxygen than it does when you're just standing around. You can also smell the person you're kissing, and researchers have demonstrated a connection between smells and emotions.

Tourists visiting Ireland often stop by Blarney Castle near Cork to kiss the Blarney Stone. It's said that kissing the stone bestows the kisser with the gift of blarney, or eloquence. takes a lot more than just lips. To reach it, people have to lie on their backs, hold a set of handrails and tip their heads backwards until they are essentially upside down.

More on the Anatomy of a Kiss

Your body may also play a role in who you prefer to kiss. Researchers have proven that women prefer men with immune system proteins that are different from their own. In theory, having a baby with someone with different immune proteins can lead to healthier offspring. Scientists believe that a woman may be able to smell these proteins while kissing, and that what she smells may affect whether she finds her partner attractive.

Check out the links on the next page for more on kissing, the human body and related topics.

Most people know that mouths are germy places. Kissing is directly tied to a few illnesses: 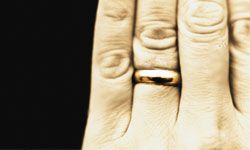 Up Next
How Marriage Works
Explore More 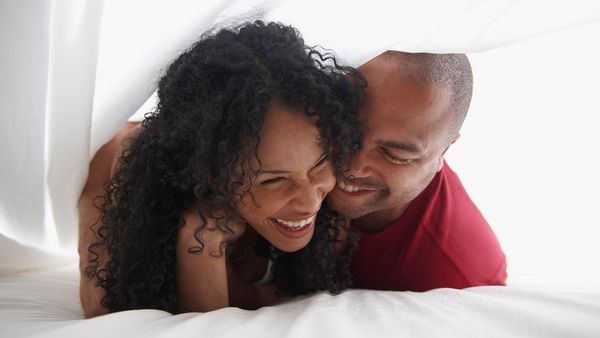