The History of the Kiss 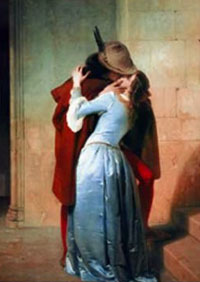 This painting, called "Kiss," was painted by Francesco Hayez in the 19th century. Before the 19th century, kisses did not appear frequently in Western artwork.
Image courtesy Amazon

Historians really don't know much about the early history of kissing. Four Vedic Sanskrit texts, written in India around 1500 B.C., appear to describe people kissing. This doesn't mean that nobody kissed before then, and it doesn't mean that Indians were the first to kiss. Artists and writers may have just considered kissing too private to depict in art or literature.

After its first mention in writing, kissing didn't appear much in art or literature for a few hundred years. The Indian epic poem "Mahabharata" describes kissing on the lips as a sign of affection. The "Mahabharata" was passed down orally for several hundred years before being written down and standardized around 350 A.D. The Indian religious text "Vatsyayana Kamasutram," or the "Kama Sutra," also describes a variety of kisses. It was written in the 6th century A.D. Anthropologists who believe that kissing is a learned behavior theorize that the Greeks learned about it when Alexander the Great invaded India in 326 B.C.

There aren't many records of kissing in the Western world until the days of the Roman Empire. Romans used kisses to greet friends and family members. Citizens kissed their rulers' hands. And, naturally, people kissed their romantic partners. The Romans even came up with three different categories for kissing:

The Romans also started several kissing traditions that have lasted to the present day. In ancient Rome, couples became betrothed by kissing passionately in front of a group of people. This is probably one reason why modern couples kiss at the end of wedding ceremonies. Additionally, although most people today think of love letters as "sealed with a kiss," kisses were used to seal legal and business agreements. Ancient Romans also used kissing as part of political campaigns. However, several "kisses for votes" scandals in 18th century England led - in theory - to candidates kissing only the very young and very old.

Kissing under the Mistletoe

Today, some people seem to spend the holiday season waiting under the mistletoe in the hopes of kissing whoever passes by. But until the 1400s, kissing under mistletoe was a big commitment. Such kisses often meant that a couple was engaged.