The Effects of Kissing 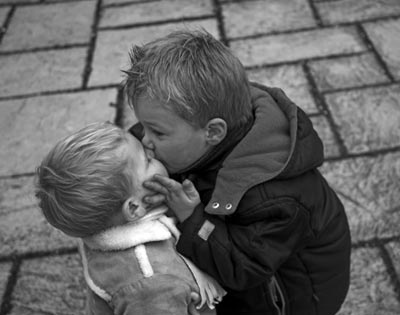 Image courtesy Esther Seijmonsbergen/Stock.xchng Whether, why and how people kiss depends largely on psychological, biological and social factors.

While researchers aren't exactly sure how or why people started kissing, they do know that romantic kissing affects most people profoundly. The Kinsey Institute describes a person's response to kissing as a combination of three factors:

These factors play a part in all kisses, not just those that are romantic in nature. In other words, when a mother kisses her child's bruise to make it feel better, psychological, physical and social factors play a part in both people's reactions. The same is true when friends kiss as a greeting, worshippers kiss religious symbols or siblings kiss and make up after an argument. Even though some kisses are platonic and others are romantic, they generally have one thing in common - they are inspired by and tend to inspire feelings we think of as positive.

Regardless of exactly how people got the idea to kiss or what they mean when they do it, anthropologists are pretty sure that people started kissing thousands of years ago. We'll look at the history of kissing in more detail next.­

What an incredible smell!

People in some cultures rub one another's noses or cheeks rather than, or in addition to, kissing. Anthropologists theorize that this "Eskimo kiss" grew from people smelling one another's faces much the way animals do.