What does it mean when a 'dance card' is full? 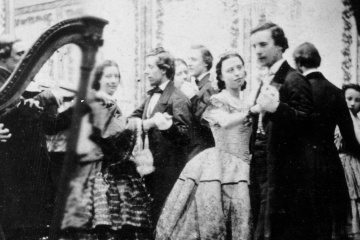 In the 19th century, dancing was a major deal. Unlike the clubs of today, social etiquette and order was of the utmost importance.
Henry Guttmann/Getty Images

Imagine getting your gang of friends together for a night of dancing. Depending on your friends, that might mean a raucous night of YouTube videos after playing Magic: The Gathering at your local comic book store, or it could mean sipping champagne next to a sweaty celebrity at a table with bottle service. Either way, you're probably not too stressed out about, say, whether you'll find an appropriate partner for each song or know the right steps to the songs the disc jockey is spinning. Dancing is fun! Casual! No big deal!

Be grateful next Saturday night, then, when you don't find yourself transported back in time to the 19th century, where dancing is neither fun nor casual and is probably the biggest social deal of your life. A typical night of dancing in the Victorian era (both in Europe and the United States) was nothing if not a tightly wound choreography of strict social behavior and actions. If you were lucky enough to be invited to a ball or social dance, you were bound to participate in the myriad rules the occasion required, lest you scandalize yourself or your host.

Before we get into the particulars of dance cards, let's first give a little background on the kind of dances where a dance card might be used at. Balls were the premier social events in Britain and the U.S. in the Victorian era, when dance cards first became popular. And it wasn't always easy to get an invite, especially if you were a lady. A man who danced was usually a welcome guest, but because lots of young ladies were presumably in attendance, hosts might try hard to make sure there were suitable partners for all [source: Post]. Too many ladies, in other words, might mean an embarrassing dearth of dance partners on the floor. And nobody was going to enjoy themselves if they were left sitting red-faced on the sidelines.

Which brings us to dance cards. They were generally given to the ladies, and the little cards would have the dances printed on them (i.e. waltz, quadrille, polka) in order of the program. Next to each dance would be a space for a man to pencil in his name, which meant he "claimed" the dance with the young woman. The dance card, then, would ensure a few things. First, that a woman could keep track of who would like to partner with her. Second, it also guaranteed that a lady was not about to ask a man — gasp! — to dance. The responsibility, you see, lay entirely with the male partner to inquire about the dance and to enforce the engagement. If Lord Bottomthistle III signed up to dance with Lady Eugenia Hustledown-Forth and didn't show up to claim his dance? Lady Eugie was left to grin and bear it. She could certainly beg off and sit out a dance, but it was the height of inappropriate to "stand up" with another man after rejecting another.

So when we say that someone's dance card was full, we imply she must have been a popular lady who snagged a man for every turn at the ball. But let's not forget the lady was also stuck with whoever asked her first.