Cake, Candles and Check: Who Pays the Birthday Dinner Bill?

It's an all too common predicament — your birthday is just around the bend and no formal party is in the works, nor has a friend volunteered to throw something together. But it's your party and you'll celebrate if you want to, so you invite a group out to eat!

But who pays for whom? Is it a faux pas for everyone to pay for themselves? Is it reasonable to expect the organizer to foot the bill for the group?

Financial writer Michelle Singletary recently devoted an entire column to the subject, slamming people who expected others to pay at a celebration.

"I want to commemorate your life moments — your birthday, engagement, bridal shower .... But if you can't afford to host, stop charging me for your celebration," Singletary wrote. "Too many times, I've shown up for an event and been told after consuming the meal that I'm expected not just to pay for my food, but to chip in for the guest of honor."

However, an informal Facebook poll showed that more than two-thirds of respondents were OK with paying for themselves at a birthday restaurant dinner.

"I would pay for my own dinner and either chip in or totally pay for the birthday guy or gal," said Lisa Walden of Summerville, South Carolina in a typical comment. "At the very least I'd buy her a drink."

Amanda Wagner of Atlanta disagreed. "We invited a group for my 40th and we picked up the entire bill. I can't imagine doing it another way because they were all there for me and I invited them to be there."

So, who's right? A lot has to do with how the invitation is worded, say etiquette experts.

"If you're going to host, you're responsible for paying. If you're not willing to pay, you're an organizer, whether for yourself or someone else," says "The Etiquette Guy" Jay Remer. "If you were invited to such a party and there was no mention of Dutch treat or ticket price, so to speak, then you should rightfully assume that the host is covering all of the expenses.

Toronto-based etiquette educator Tina Manousos offers the following examples for variations on the birthday dinner. A friend organizing a birthday party for another friend could word the invite, "Let's treat the birthday girl/boy at CIBO Italian Restaurant this Friday night at 8 p.m." This makes it clear that everyone is paying for themselves — and the honoree.

Or the birthday girl could word her own Evite like, "'You are invited to celebrate my 30th birthday at King Henry's Pub this Saturday night .... Food and snacks are on me.' That would imply that drinks would be paid by each individual," says Manousos.

Establishing in advance whether or not an event is Dutch treat is a simple courtesy that should always be offered to guests. "That way people can RSVP either yes or no but they would know what's expected," Remer says.

It's Your Birthday ... But Don't Make it All About You

One of the cardinal rules of etiquette is never to put someone in an awkward position, especially an awkward financial position.

"Be considerate of your guests and friends," emails Manousos. "If you are all struggling financially because you are students, host a small party at your home with affordable snack foods ... keep it simple for everybody."

The main thing is to avoid making your guests feel resentful. Elizabeth Wilson (not her real name) of Acworth, Georgia remembers when she and her husband paid the restaurant bill for a couple who joined them to celebrate her wedding anniversary. The following year, this couple invited Wilson and her husband to celebrate their own anniversary and the couple expected them to foot the bill. "They have a history of this, I shouldn't have been surprised," she emails. "But in my opinion, it was very rude. I felt taken for granted by our friends."

Now That's Cool
If you're organizing – but not paying for – your own birthday dinner, consider doing your guests a solid by stating ahead of time that no gifts are necessary. When asked to do the same by others, make an effort to honor their no-gift wishes, no matter how counterintuitive it feels. Instead, supplement the occasion with a personal written sentiment. 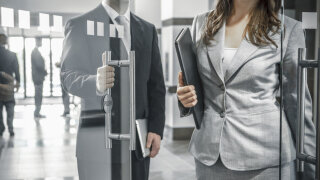 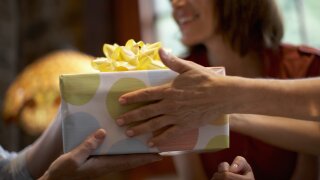 Should you ever break a 'no gifts' rule? 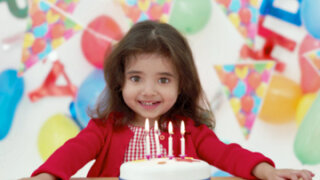 How to Affordably Throw a Birthday Party for Your Kids