Why do formal meals include so much silverware? 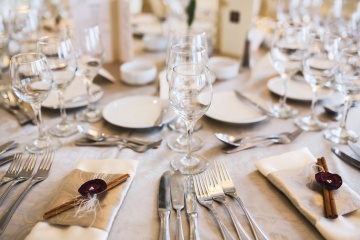 Formal dinners can be stuffy, but remember your manners - and why each piece of silverware is necessary.
razyph/Thinkstock

At the impressionable age of 8, I was staying at a friend's house for dinner. Her mother asked us to set the table, and my friend proceeded to place knives, spoons and multiple forks around plates (one big! one small!) with a reverse pickup-sticks precision. When asked about this sophisticated dining arrangement, the mother gave the usual breezy explanation that people with good manners often give -- something about how nothing's worth doing unless it's done right.

I was sold. I drew myself diagrams to make sure I had the correct template (forks, plate, knives and spoons) and would fussily fix any barbarian settings that my brother, father or mother managed to throw down on the table. I insisted on salad forks. If anticipating ice cream for dessert, I'd place the spoon above the plate, even if I knew I was planning on eating the bowl in front of the TV after homework. Nothing's worth doing unless it's done right, after all.

My mother, who was pretty genial about my newfound attention to table service, showed me the real "formal" setting of silverware and I grew more and more suspicious. Why exactly did I need a petite fork for lettuce, let alone a wimpy miniature thing for the imaginary oysters I was eating? Was it necessary to put a soup spoon and a regular spoon out? Was it really worth doing, and who exactly said it was "right"?

And thus I've stayed stubborn, 20 years later. Why do formal meals include so much silverware? The answer, somewhat paradoxically, seems to be convenience.

While it may sound unlikely (how can four different forks be more convenient than one?), it really does have to do with the specificity of each course. The idea is that each utensil elegantly serves a single purpose. That was far different from even, say, the Elizabethan era, where folks where customarily armed with only a knife and spoon that travelled with them [source: Murphy]. When the fork made its common appearance on the scene in the 18th century, the entire table setting started to spiff up: napkins folded in complicated shapes appeared and the wealthy classes began to have sets of silver in their home to show off status [source: Murphy].

And how does a wealthy person show off status? By having more. More silver forks, spoons, plates, knives and glassware. Instead of asking a guest to bring along their boring spoon and fork, you could now magnanimously provide them. To display your enormous riches and sophistication, you can even offer multiple versions of the same utensil that serves its own purpose in the dining room.

Essentially, formal meals include a lot of silverware because the idea was the hosts had a lot of silverware to provide. Necessary? Absolutely not. But who among us doesn't get that little thrill when they see they've been provided with their very own tiny fork to skewer the shrimp cocktail?