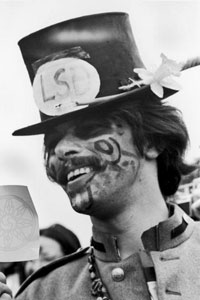 The psychedelic lifestyle peaked in San Francisco in 1967.
Getty Images

Today, flower power is most closely associated not with antiwar protests, but with acid-tripping hippies. Soon after the Berkeley Vietnam protest that inspired Ginsberg's flower power non-violence concept, the hippie movement, fueled by psychedelic drug use, mushroomed into a nationwide phenomenon. Although people preached peace and love around the country, San Francisco, the original home of beatniks and hipsters, became the port of call for hippies. There, the hippie masses embraced the flower power ethos of "loving your neighbor" and non-violent social change with radical abandon.

In January 1966, the Trips Festival in San Francisco signified the emergence of the psychedelic lifestyle [source: Ashbolt].With Allen Ginsberg and "One Flew Over the Cuckoo's Nest" author and LSD advocate Ken Kesey lighting the way toward hippie enlightenment, the Trips Festival was a visual and aural extravaganza meant to stimulate the senses so thoroughly, attendees wouldn't even need to drop acid to get a high [source: Torgoff]. Bands, light shows, art displays and plenty of psychedelic drugs attracted thousands of hippie festival goers, as well as national media attention. The same month, the Psychedelic Shop opened in the Haight-Ashbury district to educate patrons about dropping acid and serve their psychedelic drug needs until California criminalized LSD in October of that year.

Once the Summer of Love, that psychedelic season when young hippies flocked to their Mecca, San Francisco, rolled around in 1967, flower power had come to suggest more of a mindset and fashion sense than a political philosophy. Flower power clothing, for instance, featured brightly colored swirling patterns and loose silhouettes. Casting off the suiting, dresses, girdles and garters of the 1950s, hippie garb was intended to look as free and easy as the people sporting it [source: La Ferla]. Flower power also came into mainstream America with Scott McKenzie's 1967 hit "San Francisco." The popular hippie anthem sang "If you're going to San Francisco, be sure to wear some flowers in your hair." McKenzie was also one of many musical acts, along with Jimi Hendrix, The Who and The Mamas and the Papas, to perform at the Monterey International Pop Festival in June 1967, which marked the pinnacle of the Summer of Love.

Once the heat dissipated and fall arrived in San Francisco, flower power sentiment had soured somewhat, with some worried that the cause had become commercialized and diluted into a fleeting mainstream fashion trend rather than a socially progressive movement. On October 6, 1967, a funeral parade marched through the Haight-Ashbury district mourning the "Death of the Hippie." During the festivities, parade goers even burned the Psychedelic Shop sign [source: Ashbolt]. Although both hippies and non-hippies alike would continue to espouse flower power principles of peaceful demonstrations, the psychedelic lifestyle proved unsustainable. But footage of the sit-ins and gatherings organized by Allen Ginsberg and other counterculture leaders also offers visible proof that for a for a few years in the mid-1960s in San Francisco, flower power was potent, viable and life-changing.