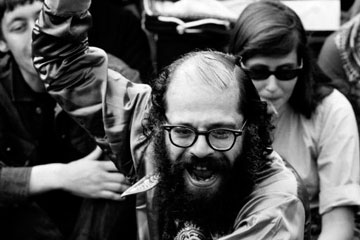 Beat poet and counterculture leader Allen Ginsberg propagated the flower power concept while helping organize a November 1965 protest against the Vietnam War in Berkeley, Calif. He wrote about the flower power strategy in his pre-protest essay "Demonstration or Spectacle as Example, As Communication or How to Make a March/Spectacle," urging protestors to "change war psychology and surpass, go over, the habit-image-reaction of fear/violence." Students from Berkeley had asked Ginsberg to offer suggestions for how to peacefully confront the Hells Angels motorcycle gang, which supported the war and had threatened violence against the Berkeley protest. Ginsberg's solution, outlined in the essay, was to defuse the possible fracas with flower power. Although Ginsberg's essay doesn't use the exact phrase "flower power," he was the first to expound on the potency of flowers as "a visual spectacle" to simultaneously disarm opponents and influence thought.

"Masses of flowers -- a visual spectacle -- especially concentrated in the front lines," he wrote in the essay, suggesting that protestors hand the blooms out to Hells Angels, policemen, press people and onlookers as a symbol of their non-violent advocacy. And in addition to bouquets, Ginsberg also encouraged protestors to take along a variety of benign objects, including toy soldiers, rubber swords, candy bars, instruments and particularly crosses to be held up in front of combative Hells Angels "like in the movies dealing with Dracula" [source: Ginsberg and Morgan]. The point of the dime store protest armory was to convey a sense of theater rather than confrontation and attract media attention to their antiwar message in the process.

With the nation mired in an unwinnable war abroad and race relations still tense after the passage of the 1964 Civil Rights Act, flower power encapsulated the counterculture response to social unrest. Ginsberg's flower power approach was an offshoot of the non-violent civil rights demonstrations led by Martin Luther King Jr., blended with the blossoming 1960s counterculture that sought to pursue a more peaceful, pleasurable existence outside of mainstream societal norms. In the months leading up to that Berkeley Vietnam protest, the University of California, and the Berkeley campus in particular, had become a hotbed of student activism. The prior fall of 1964, revolting against the campus ban on political speech and demonstration, Berkley student groups rallied together in the Free Speech Movement, which involved a series of sit-ins and picketing outside the administrative offices [source: Freeman]. The administration eventually gave in to the student protests and permitted political speeches on campus. Flower power sought to harness similar energy among young liberal students and bohemians to make an impact on the Vietnam War.

As the hippie counterculture developed out of that youthful agitation (and a burgeoning drug culture) and gained national media attention, flower power transitioned from a protest tool to a tuned in, turned off, full-blown lifestyle.