Do murderers disproportionately have 13 letters in their names? 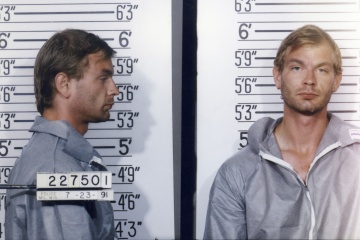 Jeffrey Dahmer, one of the most notorious serial killers in U.S. history, has 13 letters in his name. Could there be some validity to the claim that most murderers share this peculiarity?
© Corbis

The number 13 strikes fear into the hearts of many. Considered an unlucky number by many cultures, we tend to avoid poor, maligned 13 because of myriad superstitions. Most of these superstitions are well known, of course — Friday the 13th is an unlucky day, many buildings skip the 13th floor and so on.

You might want to check into the mystical number 13 a little closer to home, though. An old superstition says if you have 13 letters in your name, you'll suffer the devil's luck. Piggybacking on that superstition, conspiracy theorists believe they've found an interesting link between the number 13 and murderers. They posit that most murderers have 13 letters in their names [source: O'Keefe].

You just added up the letters in your name, didn't you? It's okay, we did, too.

Lots of conspiracy and folklore websites love pointing out the connection between 13 and murderers (or serial killers). They list all the killers with 13 letters in their name, pointing out the eeriness of the phenomenon. Understandably, it's a pretty cool theory. But does it hold water? Let's put it to the test.

Here's a list of some known murderers with a total of 13 letters in their first and last names [sources: Conradt, Law]:

We could go on and on. Obviously, none of these historical figures had murderous tendencies. In the case of murderers having 13 letters in their names, it's a neat theory, but based on false data. You can pick and choose among the names you want to use and ignore the ones you don't — Ed Gein, Joel Rifkin and David Berkowitz (Son of Sam) are all famous killers without 13 letters in their names.

To summarize, it's not necessary to avoid anyone with 13 letters in their name. Unless you already find them annoying.