Why is it considered unlucky to leave a hat on the bed? 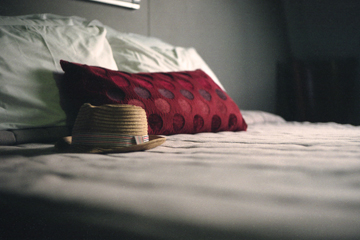 While putting your hat down on a bed might not conjure up evil spirits, it may transfer head lice.
yipchoonwai/Getty Images

You brave the blustery weather to arrive at your friend's dinner party. As you step over the threshold, she offers to take your hat and coat. You oblige, happy to be inside her cozy home and ready to have a warm drink in hand. But just as this gracious hostess carries your outerwear out of sight, you realize it's bound for respite atop a bed in a spare guest room. And that's when panic sets in.

But why? For years, people have believed that putting a hat on a bed is unlucky. Even though it may not make much sense, it's a superstition that has stuck around — ever since hats became part-and-parcel of everyday life.

Although the exact origins of this superstition are lost to history, it's believed to have started because people thought evil spirits lived in the hair. Most likely, these evil spirits were actually static buildup. As people went indoors and removed their hats, the static electricity in their hair popped and crackled, a reaction attributed to the spirits that lurked among their locks and in their hats. By laying a hat on the bed, those same evil spirits would transfer onto the very place where they'd lay their heads at night [source: Today].

While there aren't any records of anyone dying or encountering evil spirits after laying a hat down on a bed, there may have been a good reason to avoid the practice: head lice. People may have believed that placing a hat on a bed, particularly the hat of a guest, made them susceptible to head lice that migrated from the hat to the bed.

In the United States alone, an estimated 12 million lice outbreaks occur annually in children aged 3 to 11. To make matters worse, lice can be spread through contact with clothing — including hats [source: CDC].

Waking up to a head full of lice — or evil spirits — the day after a hat was put on your bed would give new dimension to having a "bad hair day."