Which is greener: cable or satellite TV? 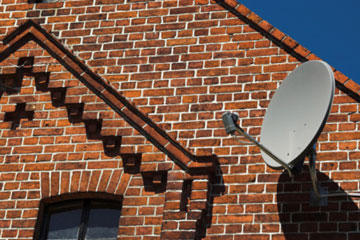 Does it take more power to run a satellite dish, or is your cable set-top box an energy hog?
iStockphoto/Thinkstock

Now that going green is part of a larger conversation, many of us are more aware of our energy consumption than ever before. It's become second nature to turn off the lights when leaving a room. However, saving energy isn't always as clear-cut as shutting off the tap when we brush our teeth. For instance, which is greener: cable or satellite television?

On the one hand, it seems like satellite television might be greener than cable. Satellite technology is wireless, whereas cable requires, well, cables. On the other hand, satellite television has been steadily gaining market share in recent years, and a bigger market share requires more employees, more infrastructure, and more drain on every conceivable type of resource [source: IDC]. Also, there's the fact that satellite customers have to deal with two hunks of plastic -- a receiving dish and a set-top box. Cable clients only have to contend with one hunk of plastic, the set-top box.

So, does that mean cable TV is greener than satellite? Not necessarily. A 2007 study of set-top boxes found that in terms of power consumption, it makes little difference whether a set-top box receives a cable or satellite signal. Instead, the included features determine whether a set-top box is an energy sipper or a power hog. High definition DVR boxes are the worst offenders. Both cable and satellite varieties can cost as much to operate as the television sets to which they're connected [source: NRDC].

When it comes down to it, neither technology is particularly green. Cable and satellite packages come bundled with power-guzzling set-top boxes that often have no standby mode. Powering them down merely dims the LED display while the box's most energy-draining features remain active. In January 2011, Energy Star released new specifications for set-top boxes [source: Energy Star]. More energy efficient cable and satellite set-top boxes should start hitting the market when those requirements go into effect in September 2011. Until then, if you want to make a truly green choice, your best bet is to invest in a power strip, which can reduce the amount of vampire power your appliances suck up.