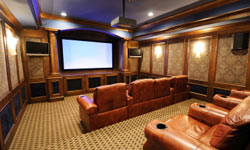 Image Gallery: Home Theaters You can transform your home theater into a room that captures the movie magic of the real thing. See more pictures of home theaters.
iStockphoto.com/M. Eric Honeycutt

Nothing says Hollywood quite like the dramatic music that introduces the Universal and 20th Century Fox films. In fact, it's hard to hear the notes for a 20th Century Fox movie without expecting to be transported to a "galaxy far, far away" by John Williams' opening score to "Star Wars." There is something that plays a close second to those powerful intros, though -- actually sitting in a cozy seat in a dark room, watching movies on a giant projector screen while the fanfare plays out all around you.

For a long time, the only way to experience that was to drive to a movie theater and buy a ticket and a bucket of overpriced popcorn. But now, thanks to the steady march of technology and the advent of HD, home theaters are more affordable than ever. Digital movie projectors aren't exactly cheap, and you could easily spend tens of thousands of dollars building the ultimate home theater in your house. But a home theater doesn't have to break the bank, and these 10 tips, some inexpensive and some pricey, will help transform your home theater into a room that captures the movie magic of the real thing. And yes, popcorn is included.