What are the effects of DVR on advertising? 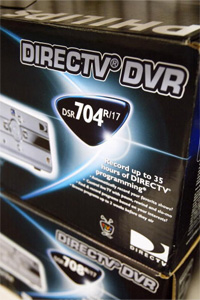 When VCRs achieved mass-market success in the late 1970s and early 1980s, there was much hand-wringing among marketers about lost ad revenue. Why? Because people could use their VCRs to record shows, then play them back without watching commercials. Just push the fast-forward button and the commercials would zip by, reduced to unintelligible blurs wedged between sitcoms and sporting events.

As it turned out, VCRs didn't kill television advertising. But that didn't stop company execs and their ad agencies from working themselves into a fresh panic when DVRs hit the market in the late 1990s. DVR stands for digital video recorder, and like its analog, tape-based forefather, the device enables consumers to record their favorite shows to a hard drive and play them back later. A new generation of mad men trembled at the impending collapse of TV advertising. Why would anyone, they railed, watch those pesky commercials when he or she could speed through the ads to get back to the good stuff?

Now, as we enter the third era of television -- when we surf the Net and surf channels simultaneously -- the big question about whether DVRs will kill 30- and 60-second spots remains. The answer is as surprising as it is complicated.

The first thing to consider is household DVR penetration. Some experts predicted it would follow the trend established by Internet broadband, reaching 70 percent penetration. The latest consumer-technology study of U.S. and Canadian households conducted by Forrester Research, however, shows that DVR adoption is decelerating. At the end of 2011, market penetration of TiVo and other similar devices will be 34 percent, but by 2015, it will only be 40 percent [source: Neff]. That's far less than many projected just a couple of years ago, when DVR penetration seemed to gain 5 or 6 percentage points each year.

Next, people who do own DVRs don't use them the way you might expect. There's a perception that DVR owners prefer recorded programming over live TV, but usage statistics don't bear this out. A Zogby International poll from 2010 revealed that, among adults of all ages, 47 percent prefer to watch live TV, with 59 percent saying that's how they watch most often. Only 27 percent like to watch programs recorded on their DVRs, with 20 percent saying they watch that way most often [source: Dolliver].

Even if viewers fast-forward, all may not be lost for advertisers.

Fast-forwarding That Ad May Not Be That Bad

People who do watch recorded programs don't necessarily skip the ads. Studies have shown that DVR users only fast-forward through about half of all ads during playback [source: Carter]. In other words, even though they can bypass commercials, DVR users don't always do it -- they schlep through the ads out of laziness or because it's become an almost ingrained behavior after decades of passive TV watching. When experts combine these stats with DVR adoption projections, they estimate that consumers will fast-forward through 5 to 8 percent of all ads and 13 percent of prime-time ads in the future [source: Neff].

If this doesn't make executives and agencies feel somewhat relieved, there's another silver lining in the dark clouds of DVR: Even fast-forwarded ads can make an impression on viewers. This finding comes out of 2008 research conducted by Boston College scientists who studied the impact of fast-forwarded ads with images centered on the screen. They discovered that candy-bar ads with information placed in the center of the screen still create brand memory and generate demand in consumers even with a loss of audio and a 95-percent reduction in frames viewed [source: Durfee].

It's one thing to change buying behavior in a controlled experiment -- what about the real world? Duke University researchers may have answered this question in a recent study. For three years, they compared shopping patterns in households with a TiVo to shopping patterns in households without DVRs. Guess what they found? Regardless of the technology configuration, people's shopping behaviors didn't change [source: Gallagher].

So what's the takeaway for company and ad agency executives? A majority of people, at least in the foreseeable future, may never own a DVR. Those that do will continue to watch a healthy portion of their programming "live." Some ads will be fast-forward victims, but if they're designed correctly, with images placed in the center of the screen, they will still influence buying behavior. It should also be noted that DVRs actually increase the amount of television being watched because they allow consumers to record and watch shows that they may have been forced to miss before they owned a DVR. Any way you slice it, the bottom line seems clear: TV advertising won't be on a deathbed anytime soon.

Recent statistics published in Ad Age bear this out. In 2009, U.S. ad spending fell almost 12 percent, the biggest drop since the Great Depression. Much of this falloff, however, was due to the general recession, not DVR use. In 2010, ad spending experienced 5.9 percent growth. That growth should continue in the near future, with broadcast ad spending, in particular, growing steadily between now and 2015 [source: Johnson].

All of this is good news for TV ad execs and the icons they create. We can expect to have the smooth-talking GEICO gecko in our living rooms for the next several years.

Advertisers fret over the negative "DVR effect" -- viewers fast-forwarding through commercials -- but on Super Bowl Sunday, they gloat. That's because we all watch the Super Bowl as much for the commercials as for the game itself. In fact, TiVo, one of the leading DVR manufacturers, analyzes DVR use during the big game to determine how many times people rewind and replay ads. The company then publishes a top-10 list of ads that receive the highest viewership. In 2011, TiVo judged the Snickers commercial featuring Richard Lewis and Roseanne Barr to be the telecast's top-rated commercial. TiVo also reported that the average Super Bowl viewer with a DVR either paused, rewound or fast-forwarded 145 times during the game [source: Seeking Alpha].