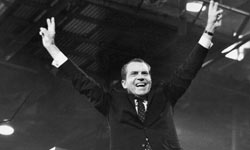 Richard Nixon gives the 'V' for victory sign after receiving the presidential nomination at the Republican National Convention in Miami in August 1968.
Washington Bureau/Getty Images

In 1952, a politician faced with a potential scandal made what must have seemed like a radical decision. He decided to address the nation -- on television. That politician, Richard Nixon, wasn't running for president yet. Nixon's address was a Hail Mary attempt to keep his spot on the Republican ticket with nominee Dwight Eisenhower in the wake of a major scandal. Having been accused of misusing campaign funds to fatten his salary, Nixon looked directly into the eyes of the American public and told them he'd never accepted a gift. Sitting next to his wife, and telling a heartwarming story about a dog named Checkers that a supporter had given to his children, Nixon won the viewers over. Later that year, he and Eisenhower won the presidential election. Nixon would have his own problems with TV later, but the Checkers speech secured the future of his political career and marked a change in the way American politicians would campaign going forward [source: Donovan].

Believe it or not, there was a time in American politics when it was seen as uncouth for presidential candidates (especially incumbents) to campaign. They might make some public addresses at campaign rallies, but for the most part they left the campaigning to the political parties and their staffs [source: CNN All Politics]. With the rise of television, campaigns were driven more and more by the candidates themselves. But that's only the beginning of TV's transformation of the American presidential election. Read on to find out how the "idiot box" changed the way leaders are chosen.

5: The Dominance of Media Consultants in Presidential Campaigns

In the early days of mass media, TV, newspapers and radio were used as tools by presidential campaigns. The candidates needed to appeal to the public, so they would use the media to do it. Today, the mass media is not just a means to an end, but one of the most important factors in determining whether a candidate for president wins or loses the election. Thanks to the 24-hour news cycle and the importance of carefully managing a candidate's image, media experts have taken a dominant role in shaping presidential campaigns [source: Kaid].

The role of the media adviser is to control the way the public sees the candidate's image. They make sure that the candidate doesn't do anything to damage that image in interviews, at news conferences or during live speeches. Richard Nixon started the first White House Office of Communications in 1968, and pioneered the media savvy campaign strategy. Nixon was careful to limit unscripted press conferences or one-on-one interviews, and instead preferred prepared speeches that let him stay in control, without interference from reporters [source: Foote]. In Ronald Reagan's two election campaigns, his advisers carefully managed his image by staging photo opportunities that told the story they wanted. For example, having Reagan photographed sitting on a tractor made him seem like an approachable friend to the working class [source: Foote]. Today, most presidential campaigns take this micromanaging approach to media relations.

4: The Introduction of Campaign Ads

When an election year rolls around, you can always count on seeing a flood of politically themed commercials. Political ads have become a huge part of campaigns. From national, to state and local elections, 50 to 75 percent of a campaign's funds are typically spent on ad production and air time [source: Kaid].

Ads are effective because they can reach people who aren't usually interested in reading campaign coverage, attending rallies or watching the news. Campaigns buy up time during popular programs so they can catch these potential voters off guard. And it works. Research has shown that voters pay more attention to political spots and ads to learn about the issues of a political race, compared to other news sources [source: Dover]. Some might see that as a sign that people are becoming more ignorant, but political ads are not necessarily misleading; they are actually more likely to engage specific issues and candidates' records than news broadcasts, which focus more on candidates' personalities [source: Dover].

One of the first presidential candidates to learn the power of TV ads was Dwight Eisenhower. He hired Rosser Reeves, a Madison Avenue ad exec who had produced a popular campaign for M&M's, to design ads for his 1952 campaign. Using jingles and slogans including "I like Ike," the ads painted the candidate as a friendly and personable leader. Democratic candidate Adlai Stevenson refused to use ads, and instead chose to buy up blocks of network time to deliver speeches. After being trounced in the 1952 election, Stevenson returned in the '56 election for a rematch with Eisenhower -- this time, with political ads [source: NPR].

In the 1964 election, Lyndon Johnson wanted to paint Republican opponent Barry Goldwater as too rash to lead. So his team put together the "Daisy Girl" ad, showing a nuclear blast striking a little girl in a meadow. Vote for Goldwater, and it could mean nuclear war, was the not-so-subtle implication [source: Dover]. In 2004, an independent group called Swift Boat Veterans for Truth put together an ad accusing Democratic candidate John Kerry of lying about his Vietnam War record, using interviews with fellow veterans to discredit him [source: Johnston].

3: The Increased Importance of Debates 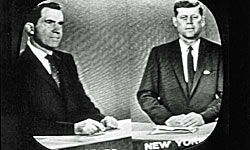 2: More Stress on Personality and Image

Personality and image have always been influential in presidential elections. FDR was extremely popular, largely because of his intimate "fireside chats," regular radio addresses that gave the American people the impression that he was a friendly, fatherly leader [source: Foote]. No doubt that image helped win him three more elections. Television news coverage has only increased the focus on image and personality in campaigns. Instead of focusing on issues and policy, news programs tend to center around the personal drama, the "who's winning, who's losing" aspect of the campaign, a tendency analysts call "horse race" coverage [source: Dover].

On TV, images and symbols matter. One bad moment can ruin a campaign. Just ask Howard Dean. He was the Democratic frontrunner in the 2000 primaries until an ill-timed "yalp" at an Iowa campaign rally made viewers question his stability [source: Roberts]. Ed Muskie, another primary frontrunner, torpedoed his 1972 candidacy when he shed tears on camera [source: Kaid]. On the other hand, Ronald Reagan, "the great communicator," was able to build his presidential success largely on his folksy, upbeat TV personality [source: Smoller].

Candidates today also control their images on television programming other than news, especially late night talk shows. According to a 2004 survey, more than 60 percent of Americans under 30 learn something about current events from a late night comedy show before they see it anywhere else [source: Farnsworth]. Bill Clinton pioneered this strategy, playing his saxophone on The Arsenio Hall Show and admitting on MTV that he wore briefs, not boxers [sources: Zurawik, Hart]. John McCain learned the hard way about the power of late night in 2008. After David Letterman skewered him for cancelling his appearance on the comedian's show, McCain's plan to "suspend" his campaign to handle the country's financial crisis got a good drubbing from the news media [source: Patterson].

After the first televised presidential debate between between John F. Kennedy and Richard Nixon in 1960, radio listeners thought Nixon came out ahead. But for TV viewers influenced by Nixon's pale, haggard appearance (he had just recovered from a cold), it was a runaway victory for Kennedy [source: Donovan]. 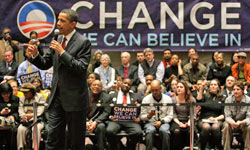