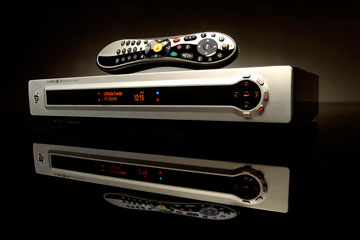 So much of what we watch today is recorded on DVRs like TiVo, and it can be hard to factor ratings into the equation.
Photo courtesy of TiVo

Since digital video recorders (DVRs) have gained popularity, television networks have had to adapt to the time-shifting, commercial-skipping technology. DVR services, like TiVo, allow viewers to schedule recordings on either a one-time or recurring basis and watch those programs whenever they like. One of the major concerns about DVRs is that viewers will fast-forward through commercial breaks, but tracking viewing habits and ratings for recorded TV is a challenge.

A DVR is really just a large hard drive with a user interface that allows you to search for shows and to schedule and watch recordings, and it keeps up with network programming schedules by connecting to a central network where it downloads that information. Some DVRs also record a buffer of live TV, allowing you to pause live action in case you want to grab a snack or run to the restroom. But how do these boxes affect television ratings?

The Nielsen Company collects traditional television ratings data by choosing a cross section of sample households and giving these viewers a set-top Nielsen box. The Nielsen box keeps a digital record of what these so-called "Nielsen families" are watching. It's trickier when you throw DVRs into the mix, however, because Nielsen boxes have a tough time keeping track of what you're watching.

What many consumers don't know about their DVRs is that in addition to retrieving scheduling information, they also share data about what you're watching and when. You might remember the notorious Janet Jackson "nip slip" during the 2004 Super Bowl halftime performance. After the incident, TiVo released a statement calling it "the most TiVo'ed moment," as TiVo users paused and replayed that clip more times than any other moment in the history of TiVo up to that point [source: Reuters]. While that in itself is interesting, the underlying point is even more revealing: TiVo and other DVRs collect your viewing information, and DVR companies are even using that data to release their own ratings numbers for recorded programs.

How do DVR ratings work, and who's measuring them? Let's take a look at the most common DVR ratings services and how they measure viewing behavior.