by Gerlinda Grimes
Prev NEXT
3 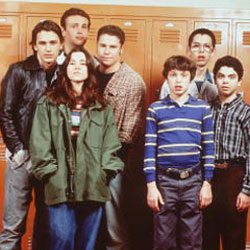 Angela Chase and the rest of her "My So-Called Life" friends may have felt out of step with their peers, but their alienation was nothing compared to the misfits of McKinley High. Set in a fictional Detroit suburb, the kids of "Freaks and Geeks" occupy the margins of high school society. On one side are the freaks, including bad boy Daniel, bad girl Kim, stoner Nick and underachiever Ken. On the other side are the geeks: the ever entrepreneurial Neal and the dorky Bill Haverchuck.

The show revolves around siblings, Lindsay (Linda Cardellini) and Sam (John Francis Daley) Weir, as they navigate the worlds of freaks and geeks. Once a mathelete and rule-abiding young lady, Lindsay defiantly trades her sweater sets for an oversize army jacket, to the general bewilderment of her loving but sometimes clueless parents. Sam, on the other hand, doesn't choose geek status. Small and skinny for his age, Sam is the kind of sweet, smart kid who may make a great man someday -- if he can survive his adolescence.

"Freaks and Geeks" nailed that rare combination of funny, awkward and sweet. It was nominated for several Emmy awards and won "Outstanding Casting for a Comedy Series." Though the show was canceled after only one season, it launched the careers of several series regulars, including James Franco and Seth Rogen.

Our next pick was also a career-making vehicle for one of its stars. We meet 46-year-old high school freshman Jerri Blank in the next section.