by Gerlinda Grimes
Prev NEXT
9 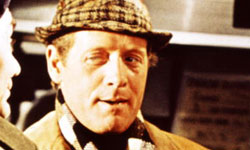 As a secret operative for NATO, Drake worked in solitude and had few cumbersome political alliances. Drake, an international man of mystery, traveled the world capturing murderers, uncovering treason, ousting spies and unraveling conspiracies. Though the ladies swooned in his presence, Drake was unfailingly upstanding in his dealings with the fairer sex.

Some might question whether "Danger Man" belongs on a list of cult hits that flopped. While the show eventually enjoyed success, it first sputtered and nearly faded into obscurity. Following a season of nail-biting half-hour episodes that aired in both the U.S. and the U.K., a lack of funding sent "Danger Man" on indefinite hiatus in 1961. After a gap of nearly four years, studio executives gave the John Drake formula another look, rewriting "Danger Man" as an hour-long drama. Many fans feel that the second season includes some of the best shows of the series. The U.S. market also aired these episodes, but the show was renamed "Secret Agent Man." A third series followed in 1965, and "Danger Man" aired its final two episodes in 1966.

The show spawned an entire franchise of memorabilia. From comic books and pulp novels to bubblegum cards and jigsaw puzzles, "Danger Man's" John Drake still endures in the hearts of fans today.

Next, we explore a more subversive genre. First on the list is "Get a Life," a dark comedy that flopped. Read all about it after the jump.