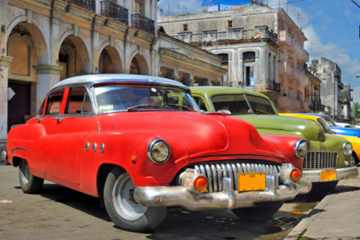 Classic cars like these are commonplace in Cuba.
Hemera/Thinkstock

After centuries of Spanish domination and a stint as the Western playground of the rich and infamous, the impact of the political and social revolution of 1959 helped create a Cuba intent on finding an independent identity.

Castilian Spanish is still the official and overwhelmingly predominant language in Cuba, but the strong Christian influences found elsewhere in South American are less powerful here. In 1969, Fidel Castro had Christmas stricken from the official calendar, and it didn't resurface until Pope John Paul II visited the island in 1996. Many Spanish and American cultural traditions suffered a similar fate, either falling out of favor officially or as a result of pervasive social pressure [source: Hispanic Culture Online].

Remnants of the past still manage to linger, though. Headwear is one example: Panama hats and Spanish sombreros are popular head gear, but so are baseball caps (baseball, the great American pastime, is still a hugely popular sport in Cuba).

Socialism has ushered in changes for the better, too, particularly in the areas of literacy, education and healthcare. According to the 1999 Human Development Index (HDI), which evaluates longevity, knowledge and standard of living in countries around the globe, Cuba's adult literacy rate is 95.9 percent, and life expectancy at birth is 75.7 years. Both of these favorable factors helped place Cuba 58th on the list of 174 countries surveyed [source: PBS].

At least half the doctors in Cuba are women, and women constitute a substantial portion of the workforce. Daycare is free and birth control is widely available, as are legal abortions for any woman over the age of 16 [source: Every Culture].

The shortages and rationing in Cuba that followed the collapse of the Soviet Union in 1991 resulted in changes in the laws governing foreign ownership of Cuban businesses. That and a loosening of the limitations on free enterprise have led to a growth in tourism on the island and a resurgence of native crafts and family farms.

Beyond the statistics, you can learn a lot about a country from its holidays. Let's take a look at a list of Cuba's popular celebrations. Birthdays and weddings are big family celebrations, of course, and the following holidays and festivals are also big island events.