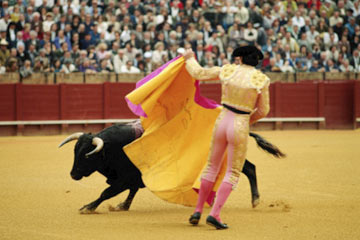 The bullfight, known also as the corrida, is one of Spain's oldest and most colorful traditions.
Jean du Boisberranger/Getty Images

The crowd rose collectively to its feet. They roared with approval and together banged their hands with the pugnaciousness of American hockey fans. Jose Tomas was back, and the spectators who crowded into a bullring in Valencia, Spain on July 22, 2011 couldn't have been more delighted [source: AFP].

For 15 months they wondered whether Tomas, the Michael Jordan of bullfighting, would return to the ring. In April 2010, a 1,000-pound (454-kilogram) bull named Navigator gored and almost killed Tomas, Spain's most beloved matador. Recuperating was long and difficult; his injuries were extensive and painful. Yet Tomas battled through the pain of ripped muscle and sinew, much to the delight of Spanish bullfighting-aficionados who howled when Tomas again faced el toro [source: AFP].

Tomas is a cultural icon in Spain, known for taking chances that would make other matadors shudder. So it was no surprise that more than 11,000 people crammed into the Valencia bullring to witness his comeback. The demand for tickets was so great that the crowd could have filled a 90,000-seat stadium. Many of those who actually saw the fight had to buy high-priced tickets from scalpers [source: Fox News].

The Spanish revere their matadors. The bullfight, known also as the corrida, is one of Spain's oldest and most colorful traditions. The bull itself is iconic and has a long, storied place in Spanish culture. Pablo Picasso, one of Spain's most famous artists, thought so much of the bull that the animal takes center stage in some of his work.

While the corrida is perhaps the most celebrated of all Spanish customs, it is not the only tradition. Much of the country's culinary, musical and artistic customs took root centuries ago as the diaspora of Spain's conquerors and immigrants blended their ways of life into an inimitable mixture of music, art, literature and food.

Those aspects of Spanish life have since migrated across the globe, beginning 500 years ago when they conquered new worlds. Whether one is eating tortillas in Santa Fe, N.M., or dancing the tango in Argentina, Spanish traditions permeate the lives of millions, giving weight to the old Spanish proverb, "He who says Spain, says everything."