How does the Hanukkah Menorah work? 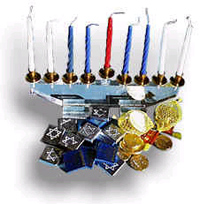 Every year, usually in mid- to late-December on the Western calendar, Kislev 25 on the Hebrew calendar, Jews around the world celebrate the holiday of Hanukkah. Also know as the Festival of Lights, the holiday remembers one particular instance of triumph over religious persecution, when the Jews were able to escape oppression at the hands of Antiochus, a Syrian king.

Hanukkah is an eight-night celebration, and the celebration includes lighting a candle in the Hanukiyah (in English-speaking countries this is often called a Menorah, which is the Hebrew word for a candelabra) on each day of the holiday.

In 167 B.C., the Syrian king Antiochus IV began to outlaw Jewish religious practices and forced Jews to adopt Greek rituals. His men took control of the Jews' Holy Temple in Jerusalem, looted it and erected an idol of a Greek god there. One Jewish family, the Hasmoneans (led by Mattityahu and his five sons), decided to take a stand against the persecution. The Greek forces arrived in the town of Modiin, near Jerusalem. It was here that after refusing to violate his own religion by praying to the Greek god Zeus, Mattityahu attacked the Greek soldiers.

This action began the Jewish rebellion. Mattityahu and his sons became known as the Maccabees, which means "men who are as strong as hammers" in Hebrew. The small army, led by Mattityahu's most famous son, Judah Maccabee, fought sizeable Greek forces. In 165 B.C., the Maccabees were triumphant. On the 25th of the Hebrew month Kislev, the Maccabees reclaimed the Holy Temple.

They decided to rededicate the temple -- the word "Hanukkah" means dedication. The Jewish army was unable to find enough oil to light the menorah, or candle holder, to be used in the service. The Maccabees found only one bottle of oil, enough for only a single night. Miraculously, the oil lasted eight nights, giving the Jews time to produce more oil.

The holiday of Hanukkah commemorates this miracle. By lighting candles for eight nights, Jews celebrate the triumph of the Maccabees, the rededication of the Holy Temple and the miracle of the oil lasting for eight days.

The most important, and most recognized, Hanukkah tradition is the lighting of the candelabra, known as the Hanukiyah (or the Menorah). The Hanukiyah holds nine candles, eight representing the eight nights of the holiday plus the Shamash -- this candle is used to light the other candles. The first candle is lit on Erev Hanukkah, the night before the holiday starts.

One inserts the candles into the Hanukiyah from right to left, one candle for each day of the Hanukkah miracle (for instance, on the second day of Hanukkah, there are two regular candles and a Shamash candle in the Hanukiyah). Blessings are said while someone lights the candles from left to right. According to tradition, the left-most candle represents the most recent day of the miracle, and one lights this candle first because he is most thankful that the oil lasted yet another day. As each day passes, the Hanukiyah becomes brighter and brighter.

These are the blessings for the lighting of the Hanukiyah:

For more information on the holiday of Hanukkah, see How Hanukkah Works.

Why is there a controversy surrounding the word 'Xmas'?
5 Halloween Candy Alternatives
Ultimate Guide to the Macy's Thanksgiving Day Parade