by Michelle Konstantinovsky Dec 18, 2018
Santa Claus would need a lot of cash to run his toy workshop. Pixelic/Getty Images

The holiday season can be magical, joyous, festive ... and expensive. Very, very expensive. And if you think mere mortals have a hard time keeping up with the food shopping, gift-giving and otherwise high-priced merriment, imagine how Santa Claus feels. Well, British company, True Luxury Travel, did just that, putting themselves in the shoes of jolly ol' St. Nick, and plotting out his exact X-mas budget.

Unsurprisingly, St. Nick has to spend a ton of dough to keep his workshop moving at top speed. And while Christmas certainly isn't celebrated by everyone, consumers tend to spend a lot during this time of year, whether they're observing a religious holiday or simply celebrating the season. According to a Gallup report, Americans will average $885 on gifts this year — and that hardly accounts for the time and effort necessary to produce, package and ship those gifts all over the world.

While some may believe all that magic happens through factories and shipping agencies, others know the real magic happens in the North Pole. Here's what Santa could be spending to fulfill all those dreams of a White Christmas:

As True Luxury Travel points out, there are approximately 2 billion children in the world (2.2 billion according to UNICEF). And because a fair number of non-Christians are known to celebrate Christmas, that means approximately 45 percent of the world's population commemorates the day. That adds up to about 900 million kids getting gifts ... and not just one toy each, mind you.

Research indicates most kids receive at least 16 gifts apiece, so that means Santa's workshop is churning out approximately 14.4 billion toys! True Luxury also cites the cost of production for one plastic toy at 2.52 euros, meaning the total production cost of 14.4 billion toys would amount to 36.6 billion euros — or about $41.6 billion! That's a boatload of cash spent on kiddie presents.

But that just covers the cost of the gifts themselves (assuming kids are being gifted toys and toys only, which any kid will tell you is not the case — see: every unwanted ugly sweater and fruitcake ever).

Santa's good, but he's not a one-man show. True Luxury Travel estimates that the big guy in the red suit would need around 132,000 elves to do all the menial labor in his workshop. A compelling argument here takes a number of factors into account, including hours in an elf workday and toymaking rate in toys per hour and puts the number of elves closer to 85,800, but that's only if kids are getting one toy (again, see above).

So, if we assume kids are likely receiving more than one toy each Christmas, Santa probably employs 132,000 elves — it's closer to the truth anyway (well, as "true" as any of this can be). The federal minimum wage in the U.S. is $7.25 per hour. If all those elves are working year-round to ensure the gifts go out in time for Christmas, that's $15,080 per year, per elf (assuming each elf works 40 hours a week). For an army of elves, that's about $1.9 billion a year. Who knew Santa was such a mogul?

Clearly, Santa's workshop is located a little north of the U.S., but for simplicity's sake, let's assume he's paying for gas and electricity in American dollars. The North Pole chill is no joke, so if the Clauses have to heat and light their massive workshop (estimated to be about 1.2 million square feet [111,483 square meters]), they could be shelling out $1.34 per square foot on electricity and 18 cents per square foot on natural gas. That amounts to another $1.6 billion on electricity and $2.2 million on gas, so another $1.8 billion total. Phew.

Clearly Santa and his crew will be paying for housing costs as well. True Luxury Travel took a look at rent costs in Finland where Santa's likely to call home base. Based on the size of his massive workshop, monthly rent would work out to approximately $98,500, or $1.2 million per year. Pretty modest when you think of U.S. housing prices, honestly.

And let's not forget those reindeer. True Luxury Travel relies on the estimated cost of owning a horse to calculate the cost of caring for reindeer. The average cost of maintaining a horse in the U.S. is $3,876 per year. For all eight reindeer, we're talking $31,008 a year.

And finally, if we assume Santa's sleigh is as expensive to maintain as a luxury car, then he's shelling out at least $1,780 a year to keep things running smoothly.

Now That's Cool
Santa as we know him is a product of advertising. Coca-Cola advertising to be more specific. Artist Haddon Sundblom illustrated the Christmas legend as a jolly man in a red suit for a widely circulated Coke campaign in 1931.

The 'Perfect Storm' of Elderly Dementia and Guns

The Ballad of the Pickled Whaling Captain from Connecticut 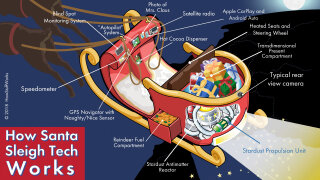 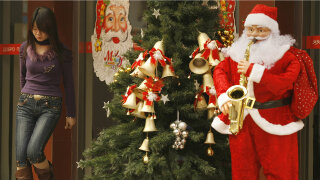 The Many Faces of Santa: From St. Nicholas to Saxy Santa