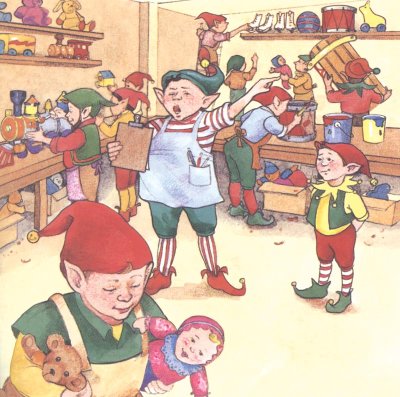 ©2007 Publications International, Ltd. The elves were busy working hard to finish all of the toys before Christmas.

There were only a few days left before Christmas. All of Santa’s elves were working hard. Cornelius, the elf in charge of Santa’s Workshop, was giving orders to the workers. Some elves were busy at benches where they made dolls of all kinds. They also sewed beautiful costumes for the dolls to wear.

Another group made only the fastest toy trains. Others were proud of their skates and sleds. “We need some more gold paint for our train engines,” called one elf. “And we’re running out of carpeting for these doll houses,” said another. Santa’s Workshop was a busy, busy place.

One of Santa’s elves, though -- a tiny elf named Casey -- was not assigned to any of the workbenches in Santa’s Workshop. For years, Casey had been trying to show that he, too, could make beautiful toys. But every time he tried, things just went wrong.

“Let me paint that doll’s face,” he would plead. But when he tried, he smeared paint all over himself. And all over anyone or anything near him, too. “I can build that dollhouse,” he would say. But when he hammered, none of the nails ever seemed to go in straight. Everyone loved little Casey. But, as Cornelius said, “That tiny elf will never be a toymaker!”

©2007 Publications International, Ltd. No matter how hard Casey tried, he couldn't seem to get it right.

Every year, after Santa delivered toys to all the children, he came back to his workshop to thank the elves. They gathered around to hear how Rudolph had lighted the way for Santa’s sleigh. Cornelius said, “Remember when Tracy got that special baby doll she wanted?” “And remember how Lamar loved that toy train we made?” said Winkie, another elf.

“Lisa really learned how to ice skate with those figure skates we made for her,” added the elf Joey.“Because of you, lots of children are happy every year,” a smiling Santa told them. The elves clapped their hands in delight. It was the proudest moment of Christmas for Cornelius and his workers.

On this day before Christmas Eve, as the elves worked faster and faster, the door to the workshop suddenly swung open. And who should come through the door but Santa himself! “How are things going?” he asked Cornelius. “We’re doing our best, Santa,” said Cornelius. “We’ll work late tonight, if we have to. I promise that we won’t leave a single toy unfinished.”

©2007 Publications International, Ltd. All of the elves gathered around Santa to receive letters from the children.

Santa looked at the thick sheaf of papers in his hand. “Here are the latest letters children have sent to me,” he told Cornelius. “Just be sure we don’t forget anyone.” Santa read through the letters, showing each one to Cornelius. They both checked to be sure every toy would be ready for the next night, Christmas Eve.

After Santa left, Cornelius went around from workbench to workbench, giving last-minute orders for toys. Casey followed him through the workshop. “We’re going to need another one of those trains with the big engines,” he told the elf in charge of making all the toy trains.

“Oh, please let me make that train!” pleaded Casey, tugging on Cornelius’s sleeve. But Cornelius just smiled and patted Casey on the head. “I’d like to let you try, Casey. But we don’t have time. Maybe next year.”

Casey sighed. Why wouldn’t they ever let him do anything important? He went over and sat down in one of the toy wagons. “It isn’t fair,” he said to himself. All the elves worked late into the night. Cornelius walked through the workshop. “Is that sled ready for Eddie?” he called.

“Almost finished,” shouted an elf who was busy putting the final coat of red paint on a sled. “What about the dollhouse for Cherise?” “I’m nailing the roof on it right now,” came the answer from another elf.

Cornelius walked by a group of workers making stuffed animals. “Remember that Tina wants her teddy bear to be nice and soft,” he warned. Casey helped the other elves by running to get some more blue and yellow paint and by picking up dropped nails. But how he wished he could make a toy all by himself!

©2007 Publications International, Ltd. Casey tried to be as helpful as he could to the bigger elves, but he secretly wished he could make a toy all by himself.

Finally, when the clock struck midnight, the weary elves finished the last toy. “Tomorrow,” said Cornelius, “we only have to help Santa load up his sleigh.” Tomorrow would be Christmas Eve. As the elves filed out of Santa’s Workshop, Casey turned back to take a final look at all the wonderful toys the elves had made.

But what was that piece of paper lying beneath Cornelius’s desk? Casey ran back into the workshop and picked it up from the floor. “Oh, no!” he cried when he read it. The elves had forgotten one last toy!

The piece of paper was a letter from little Mattie, who wanted to be a dancer when she grew up. She was asking Santa to bring her a special ballerina doll for Christmas. What was Casey to do? By now, the other elves were in bed, and it was too late to call them back to work. But poor Mattie -- she would be terribly disappointed on Christmas Day!

Casey sat down on one of the toy wagons to think. Suddenly he had an idea. He would make the ballerina doll himself! With that, Casey went to gather all the materials he would need. While the other elves slept, Casey worked through the night. He sawed and sanded. He painted and sewed.

Just as the morning sun peeked in the windows of the workshop, Casey held up his finished doll. He had made a beautiful ballerina with dark hair, sparkling eyes, a pink dancing costume, and pink ballet slippers! Now it was ready to pack on Santa’s sleigh.

As always, when Santa finished his long Christmas Eve sleigh ride, he returned to his workshop. He had delivered the toys to children all over the world. Now he wanted to thank the hard-working elves. This time, though, Santa said, “I want to thank one little elf in particular. Because of him, not a single child will be disappointed on Christmas morning. This elf stayed up all night to be sure no toy was forgotten.

©2007 Publications International, Ltd. Casey was so happy to receive the award for "Christmas Elf of the Year."

“For his help,” Santa said, “I have a special award for a special elf -- Casey!” At that, Santa pinned a medal on Casey’s jacket. The award said, “CHRISTMAS ELF OF THE YEAR”!

Casey was the happiest little elf in Santa Land that year. He puffed his chest out proudly as he wore the medal pinned to his jacket. “Next year,” said Cornelius, “Casey will be in charge of making all our dancing dolls.”

Best of all, Mattie and her ballerina doll had the most special Christmas ever!