'Santa Claus is Coming to Town' 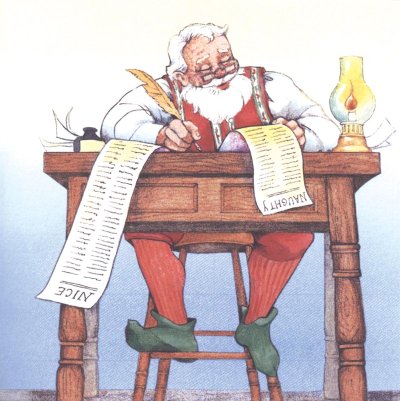 ©2007 Publications International, Ltd. Santa Claus had to decide who's been naughty or naughty.

Santa Claus was sitting at his desk, looking over his lists of children. Most of them had been very good all year, but there were a few he was worried about -- especially Sam and Mike. “Well,” said Santa Claus to his best helper, the elf Cornelius, “what’s the latest news about Sam and Mike?”

“Well,” said Cornelius, “they try hard to be good. But they seem to have a hard time. They get into trouble pretty easily.” “There are only four more days until I have to make my big trip,” said Santa Claus. “We must decide about them soon.”

I’ll keep my eye on them,” said Cornelius. “I’ll let you know how things are going.” Sam and Mike, the brothers Santa Claus and Cornelius had been discussing, ran into their kitchen. “It’s four more days until Christmas,” said Mike.

“Boys!” said their mother. “Must you argue over every single thing?”

©2007 Publications International, Ltd. Sam and Mike couldn't agree on how many days were left until Christmas.

“You two are always arguing,” replied Katie. “Don’t you know what happens to children who argue all the time?” “What?” asked Sam and Mike.

“Well, in three -- or four -- days, Santa Claus will be coming. And he knows all about you two.” “What do you mean?” said Sam. “Santa knows whether you’ve been good or bad. So you’d better watch out, you two!” “Gee!” said Mike.

“Maybe we should be careful. Okay, no more arguments. Let’s go sledding.” Sam and Mike got their coats and boots. “Last one outside is a -- Oops!, I forgot,” said Sam.

©2007 Publications International, Ltd. Kate warned Mike and Sam about Santa, and how he knew all about the boys mischief.

Walking down the street, they passed Mr. Paulson’s yard. “That’s the best hill for sledding,” said Mike. “Let’s sneak in and sled down!” “Mr. Paulson said he doesn’t want anyone to sled in his yard,” replied Sam. “But maybe just this one time wouldn’t hurt.”

Just as they were pushing off, who should look out the window but Mr. Paulson. “What did I tell you boys!” he shouted from his door, waving his fist.

Meanwhile, Santa Claus decided to see how things were going in his workshop. The elves were working furiously. “Cornelius,” called out Santa, “what’s the latest news on those two mischief makers, Sam and Mike?" Cornelius shook his head and told Santa about the boys’ argument. He also said they had gone sledding in Mr. Paulson’s yard.

©2007 Publications International, Ltd. Santa consulted with his little elves about Sam and Mike.

“Those boys,” said Santa Claus sadly. “They do have a hard time being good.” He looked around the workshop and asked, “What do they want for Christmas?” Cornelius and another elf held up two toys. “Mike wants a toy train like this one, and Sam would like some ice skates,” said Cornelius. “Well, I sure hope I’ll be able to deliver them,” said Santa.

It was just about this time that Sam and Mike were continuing on their way toward the park. “Maybe we’ll find something fun to do there without getting into trouble,” said Mike. At the park, they found a group of boys building snow forts.

The boys had chosen teams and were going to see who could build the biggest and best snow fort. Then they’d have a snowball fight. “Let us help,” called Mike and Sam.

©2007 Publications International, Ltd. Sam and Mike didn't like the way Joey had been treated. They decided to do something about it.

“Sure, join in,” said Charlie, one of the bigger boys. Just then, Sam noticed a little boy sitting by a tree, away from the other boys. He looked as if he had been crying. “What’s wrong with Joey?” Mike asked Charlie. “Oh, Joey wanted to be on one of our teams,” said Charlie, “but he’s too little.” Sam and Mike thought about that and decided they didn’t agree.

“Hey, Joey!” called Sam. “Mike and I need someone just your size to reach the tough spots.” The three of them got to work. Soon their fort was as tall as the other ones.

And then, with Mike and Sam lifting Joey up high to pile the snow on top, their fort stood even taller! “Joey,” called Charlie, “would you help our team a second? We need to get up high, too.” With a big smile, Joey ran over to help Charlie’s team.

©2007 Publications International, Ltd. Joey, Mike, and Sam made the best team ever. Together, they built the biggest snow fort.

A few days later, at the North Pole, Santa Claus was getting ready for his trip. The time had finally arrived -- it was Christmas Eve! Santa had already hitched up his reindeer. “Cornelius,” called Santa, “what is the latest news on Sam and Mike? I’m ready to pack their skates and train.”

“Great news, Santa,” said Cornelius. Then he told Santa Claus how Sam and Mike had asked Joey to help them build their snow fort, when none of the other boys would let Joey play. Santa smiled his biggest smile of the day. “I knew they were good boys!” he exclaimed. “Sam and Mike did the most important thing -- they were kind to another person. That’s what really counts.”

As Santa Claus was starting on his trip, his sleigh loaded with toys, Sam and Mike were getting ready for bed. They had hung up their stockings by the chimney. Cookies and milk were set out in case Santa wanted a snack.

©2007 Publications International, Ltd. Mike and Sam knew Santa was watching. They decided to be kind to one another instead of having a pillow fight.

After they were all tucked into bed, Mike whispered, “Hey, Sam, look out!” Just then, he threw his pillow across the room. It landed on Sam’s head.

With a whoop, Sam yelled, “I’ll get you!” He started to throw his own pillow back at Mike. But then he thought, “Someone knows whether I’m being good or not.”

At that same moment, Mike remembered that someone knew when he was sleeping and when he was awake. Mike just whispered, “Good night, Sam, and Merry Christmas!” A hush fell over the room as they closed their eyes.

©2007 Publications International, Ltd. Santa left the greatest gifts for Mike and Sam. After all, they were good, for goodness sake!

Late that night, while Mike and Sam slept, a smiling Santa laid a little toy train and some shiny new ice skates under the tree. If they had been awake, they would have heard a happy Santa say, “Well done, Mike and Sam! You were good, for goodness sake!”

In the final story in our collection of Santa Claus Stories, find out how a tiny elf with something to prove finally reaches the top -- but not without a few bumps and bruises along the way. You'll find the story about 'The Tiny Elf' on the next page.