'The True Story of Santa Claus' 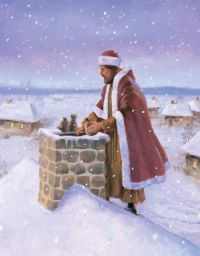 Long before he lived in the North Pole, and long before his yearly Christmas visits brought joy to all the children of the world, Santa Claus was a child himself. He was once just an ordinary baby boy named Nicholas. The baby boy was just like any other, but his parents hoped for great things from their only son. They named him Nicholas, which means "hero of the people."

Even at a young age, Nicholas was a kind and generous boy. He often helped the people in his village. He shared his meals with those who had nothing to eat, he was always the first to lend a helping hand, and he brought joy to young and old alike. There was no better friend to have than young Nicholas.

At a very young age, Nicholas joined the church. It was his duty to help people. Nicholas gave special attention to the children of his village, and they were very fond of Nicholas for his playful and joyful manner.

Nicholas became well-known throughout the land as a kind and wise young man. He was soon named a bishop of the church. Because Nicholas was still so young, people called him the "Boy Bishop."

Nicholas wore a long red robe with a red hat, and he traveled on horseback. At every village, happy children would spot his bright robe from a distance and gather in the road to greet him.

In one village, Bishop Nicholas heard the sorrowful tale of a poor old man and his three young daughters. It seemed the man could no longer feed his daughters, and he feared he would have to send them away from him. Nicholas knew he could help this family.

That night, while the whole village slept, Nicholas crept up to the hut where the three sisters lived. He climbed up to the rooftop to find the chimney. There Nicholas dropped three bags of gold, one by one, down through the chimney stack.

Earlier that day, the three sisters had hung their newly washed stockings by the fireplace to dry. Each small bag of gold that Nicholas dropped fell into one of the stockings below.

The next morning, the girls were overjoyed to find gold coins in their stockings. "Father!" they called, running to wake him. "We have received a magical gift!"

As the story of these three sisters spread from village to village, other people began to hang their stockings by the fire, hoping to find a secret gift when they awoke the next morning. Though this was Bishop Nicholas' most famous gift, it was not his first good deed. And it would certainly not be his last.

Bishop Nicholas enjoyed surprising people. He began to deliver his secret gifts of hope and joy only at night, while his friends were asleep.

People all over the world began to celebrate St. Nicholas Day. They hung their stockings by the fire the night before and awoke the next morning to find them filled with candy, fruit, nuts, or toys. St. Nicholas had left a magical gift at each home!

Many years ago, people began to celebrate St. Nicholas' good deeds on Christmas Day, another holiday in December. St. Nicholas has many names around the world. In some places he is called

"Sint Nikolass" or "Sinterklass." Many people know him today as Santa Claus.

A true hero of the people, St. Nicholas still delivers his magical gifts each year at Christmastime. The gifts Santa Claus delivers, gifts of hope and joy, bring the joy of giving to all the children of the world. -- By Brian Conway

What happens when a child asks if there is indeed a Santa Claus? The story on the next page, "Yes, Virginia, There Is a Santa Claus," provides an answer.