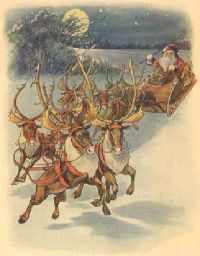 "Mommy, Mommy! Do you think they left the North Pole yet?" my four-year-old son anxiously queried in an unusually deep voice.

"Gosh, I don't know, Kev," I replied. But then, after thinking about the anticipation in his eyes and voice, I corrected myself and said decidedly, "Oh, yes, absolutely, positively, yes. Santa and the reindeer have definitely left the North Pole by now."

This little imp of a child grinned from ear to ear and began describing what the reindeer were discussing on their flight through the sky as they visited every child in the world. Rudolph the Red-Nosed Reindeer, of course, was the brightest because he was smart enough to turn his nose on and off like a blinking red light. He would tell them what the weather was, which country they would visit first, what the dangers were of landing on a weak roof, and to listen only to Santa for their directions. He reminded me that "even the reindeers are not allowed to talk to strangers," as if there would be a lot of them racing around the sky.

Kevin began to sift through Christmas cookies to find the most perfect cookies to leave for Santa. After much debate, he decided that "this reindeer with the chocolate horns looks like the one Santa would want. So does this angel with yellow sprinkles and this toy soldier with a big red hat and this star like the one that saw Jesus...."

He gently put them onto the dish he made in nursery school, licking his fingers after each placement and picking off a chocolate sprinkle or two. Kev poured Santa a glass of milk, placed it next to the cookies on the dish, and toddled to bed as he wondered when they would arrive.

"Do you think Santa will knock or come down the chimney? Will he burn his tummy, or does he have on fireproof underwear? Can the reindeer come in, too?" Finally, the little guy with the twinkling brown eyes and mop of chestnut hair could not think of any more things to say, and he fell asleep until around midnight when I heard him shriek, "I hear them, I hear them! They're on the roof! Santa's reindeers are on the roof!"

Kevin never did convince his brother and sister that he had heard reindeer hooves on the roof. But he believed it...for years and years and years.... -- By Elizabeth Toole

Continue to the next story -- The Truth About Santa -- to learn how to keep the spirit of Saint Nick alive, regardless of your age.