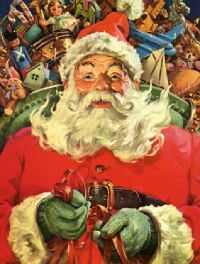 Santa Claus is a beloved and influential figure in the lives of many children -- and their parents, who first explain who Santa is and then, in a few years' time, have to answer the question, "Is there really a Santa?" In the meantime, those same parents have played the role of Santa behind the scenes. It's quite a responsibility.

Here we've assembled five wonderful stories about Santa Claus, spanning more than a century. Together they capture the essence of the beloved Saint Nick, and, along the way, they suggest many insightful ways of viewing -- and explaining -- this important figure.

Here are snapshots of the Santa Claus stories we've included in this article: