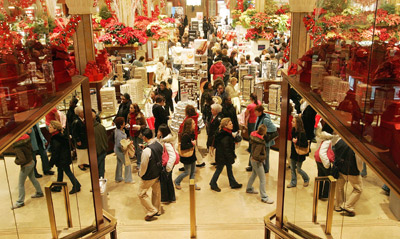 Christmas traditions have a way of feeling timeless -- you may have seen the same ornaments, sung the same songs and eaten the same foods for your whole life. Some Christmas traditions are, in fact, ancient. They have pre-Christian roots and originate from pagan winter-solstice celebrations or Roman festivals. Other traditions are relatively modern--either rescued from oblivion or conjured up in the surprisingly recent past. Some significant holiday traditions include decorations, activities and food.

With Americans spending about $8 billion annually on Christmas decorations, it's clear that tinsel, green trimmings and electric lights are an important part of most peoples' holiday [source: ABC]. Evergreen trees and garlands were used as decorative symbols of eternal life by ancient Egyptians, Chinese and Hebrews; European pagans sometimes worshiped evergreen trees. By medieval times, western Germans used fir trees to represent the Tree of Paradise in mystery plays about Adam and Eve. They decorated the trees with apples and later with wafers to symbolize the host. The trees grew increasing popular in Germany and settlers introduced them to North America in the 17th century. Many people also decorate with holly, mistletoe and ivy. Decorators started lighting up their trees with electric bulbs in the 1890s. Since then, lights have become an integral part of Christmas decorating.

Outdoor light displays and other decorating traditions have created Christmas activities of their own. Decorators sometimes compete over the most ornate lighting displays and spectators walk or drive through neighborhoods to marvel at the exhibits. Schools and churches often stage Christmas pageants that reenact the Nativity. Saint Francis of Assisi started this custom in 1223, believing a life-size staging of the Crèche would make Jesus' story clear and accessible. Christmas pageants might also include traditional carols which are still sometimes sung door to door by groups of friends or neighbors.

Traditional Christmas food often gets a bad rap -- there's green beans soaked in mushroom soup, potentially primordial fruitcake and blob-like figgy pudding that, for some reason, made carolers sing "we won't leave until we get some." But Christmas fare is also a delicious combination of harvest feast foods, like turkey, squashes and potatoes; winter festival foods like roasted meats and an array of baked goods that outdoes any other time of year. Many novelty treats mimic other Christmas traditions: the Bûche de Nöel imitates the Yule log, gingerbread houses copy well-trimmed colorful chalets and cookie cutters turn out legions of trees, stars and Santas.

Of course, Christmas traditions center on the assumption that Jesus was born on Christmas Day -- the 25th of December. In the next section, we'll learn the history behind the nativity's date.

So This is Christmas?

Although about 96 percent of Americans celebrate Christmas on Dec. 25, there are still those who do not [source: BBC]. Most, of course, are non-Christians who wish to avoid both the religious and secular aspects of Christmas. Some, however, are Christians who simply observe Christ's birth on a day other than the 25th or Christians who do not believe in celebrating the nativity at all. Members of the Armenian Church observe Christmas on Jan. 6, the traditional day of the Epiphany in western churches. Russian and Ethiopian Orthodox Churches celebrate on Jan. 7. Some American Christians follow their family's European traditions and celebrate on Christmas Eve.

So if you don't celebrate Christmas on the 25th or at all, how do you enjoy a day off when nearly everything is closed? Many families use their vacation time to gather and visit. Some go out for Chinese food or catch a movie after theaters open in the afternoon. Jewish organizations might sponsor "Matzo Balls," socials that take place on Christmas Eve or Christmas.