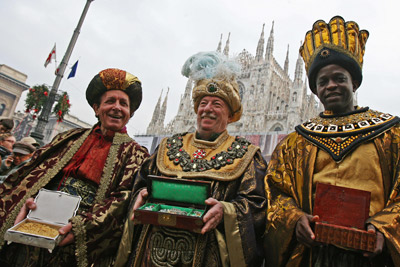 For many people--whether they care to admit it or not--Christmas is about presents. Children nearly burst in anticipation of Christmas morning. Far-sighted adults start stockpiling on-sale gifts early in the summer. The procrastinating multitudes flock to the mall in the week preceding the holiday.

Christmas's gift-giving tradition has its roots in the Three Kings' offerings to the infant Jesus. The magi traveled to Bethlehem to present Christ gifts. Some Eastern Orthodox Churches and European countries still celebrate the traditional date of the Magi's arrival -- January 6 or Three Kings' Day -- with a Christmas-like gift exchange.

Romans traded gifts during Saturnalia, and 13th century French nuns distributed presents to the poor on St. Nicholas' Eve. However, gift-giving did not become the central Christmas tradition it is today until the late 18th century.

Gifts were ostensibly meant to remind people of the magi's offerings to Jesus and of God's gift of Christ to humankind. But despite the rationalized Christian roots of gift-giving, the practice ultimately steered Christmas closer to the secularized holiday it is today. Stores began placing Christmas-themed ads in newspapers in 1820. Santa Claus, the increasingly popular bearer of gifts, started popping up in ads and stores 20 years later. By 1867, the Macy's department store in New York City stayed open until midnight on Christmas Eve, allowing last-minute shoppers to make their purchases.

Today, Christmas is a bonafide gift-giving bonanza. Desperate parents scrabble over the under-stocked toy of the season. Stores bring out the tinsel and greenery in early October. And sale-enthusiasts queue up before dawn the day after Thanksgiving. Most retailers rely on the holidays to make up for the summer doldrums and prepare for the slow sales of the New Year. This dependence has made Christmas, a single day in late December, swell into a three month holiday season. "The holidays" -- with their sales, decorations and mall Santas -- now reign through nearly a quarter of the year.

Some shoppers appreciate the early bird merchants. They make their purchases over the summer or in the early fall to avoid stress or save money. But for many consumers, October allusions to Christmas only serve as an annoyance, or, in some cases, even a deterrent from shopping at all. In response to consumer complaints, many stores have adopted subtler holiday tactics. They still begin their sales and ad campaigns in early October but hold back the overt holiday images and greetings until closer to November [source: New York Times].

Next, we'll learn about the history of some favorite Christmas traditions.

For people in Great Britain, Australia, Canada and New Zealand, the holidays don't end the day after Christmas. Dec. 26, or Boxing Day, is a time for continued gift exchange and sport. Boxing Day began as a holiday for servants and other working people who had to serve through Christmas. As a reward, they were relieved of their duties the following day and given gifts by their employers. Dec. 26 is also the feast day of Saint Stephen, the patron saint of horses.