In American politics, the next crisis is never far away. Whether it's a big-headline scandal or a routine backroom arm-twisting, politics practically can't exist without some kind of daily drama. Heck, "The West Wing" and "House of Cards" taught us that.

The most Beltway-shaking of all these crises is the "constitutional crisis," an inexact term that seems to be applied with all the discretion of a pitch for campaign contributions. "There is hardly a disagreement in American law, however slight," law professors Sanford Levinson and Jack Balkin wrote — nearly 10 years ago — in the University of Pennsylvania Law Review, "that someone will not label a 'constitutional crisis.'"

The last time we were talking about a constitutional crisis was when Chairman Jerrold Nadler (D-N.Y.) and the House Judiciary Committee decided to hold Attorney General William Barr in contempt of Congress in June 2019, for his failure to produce documents pertaining to special counsel Robert Mueller's nearly two-year investigation into Russian interference in the 2016 election. President Donald Trump answered by declaring the un-redacted portions of the report off-limits under executive privilege.

Thus, Nadler sounded the alarm. Speaker Nancy Pelosi (D-Calif.) backed him up. "We've talked for a long time about approaching a constitutional crisis. We are now in it," Nadler said on May 8, 2019. "[The executive branch is] uniformly rejecting subpoenas from Congress. This means that they have decided to oppose the role of Congress as a coordinate branch of government representing the American people."

The showdown with Trump revolved around Congress' power of oversight, derived from the "legislative Powers" clause in Article I of the Constitution. From the House website:

Congressional investigations not only help legislators make better policy decisions, but they are central to the system of checks and balances. Investigatory hearings can uncover presidential abuses of power and corruption, such as the Teapot Dome scandal in the 1920s or Watergate in the 1970s.

This time the constitutional crisis also is regarding congressional oversight, but legal scholars are suggesting this instance it could be different. It's also about impeachment. And it revolves around a letter White House Counsel Pat Cipollone sent to congressional Democrats Oct. 8. The letter states the Trump administration won't cooperate in the ongoing impeachment inquiry, and accuses the inquiry of being invalid and unconstitutional.

The letter also states that "President Trump cannot permit his Administration to participate in this partisan inquiry under these circumstances." The letter reads as if Trump's attorney is essentially saying the idea of checks and balances doesn't pertain to his administration. If that's the case, this would technically be a breakdown of the U.S. structure of government as written in the Constitution.

Is that a constitutional crisis?

In their 2009 paper, Levinson and Balkin defined the term like this:

A constitutional crisis ... is a potentially decisive turning point in the direction of the constitutional order, a moment at which the order threatens to break down, just as the body does in a medical crisis.

Two political science professors offer their own definition of a "Constitutional crisis" in a post on the site fivethirtyeight.com. They suggest that crises arise ...

The last one might hit closest to the current situation in the United States.

Is This a Crisis or Just D.C. Drama?

Constitutional crises may seem cheap — the Teapot Dome scandal; Watergate and the impeachment hearings of President Richard Nixon; the disputed 2000 presidential election; the impeachment of President Bill Clinton; congressional blocking of a Supreme Court nominee; even Trump's appropriation of money to build a border wall all have been slapped with the term — but true crises regarding the U.S. Constitution are probably not as common as all that drama may make them seem.

"People generally use the term 'constitutional crisis' to describe periods when institutions of government are clearly in conflict. But the mere existence of conflict, even profound conflict, cannot be the definition of crisis," Levinson and Malik wrote. "Government institutions are always in conflict."

Noah Feldman, a Felix Frankfurter Professor of Law at Harvard Law School, wrote in an op-ed for The New York Times that President Trump's refusal to respond to the House impeachment satisfies the two conditions for a constitutional crisis because the Constitution doesn't spell out how to proceed when "the House tries to exercise its constitutional power of oversight to investigate the president and the president flatly rejects the House's constitutional authority."

Whatever it is — whether it's Washington as usual, or a disagreement that endangers the very document that upholds our democracy — the drama never ceases. That's American politics.

NOW THAT'S INTERESTING
What may be crisis to one may just be an insidious fraying around the edges to others. In a 2017 paper, Yale Law's Balkin defines something he calls "constitutional rot" as "a process of decay in the features of our system of government that maintain it as a healthy democratic republic." Examples (in his words): "When politicians disregard norms of fair political competition, undermine public trust, and repeatedly overreach by using constitutional hardball to rig the system in their favor and keep themselves (or their allies) in power, they cause the system of democratic (and republican) constitutionalism to decay."

The Electric Guitar Made for Women Rockers 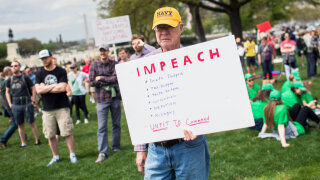 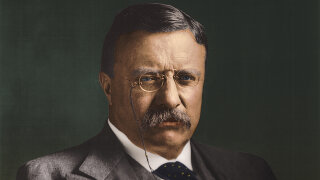