The History of Circumcision 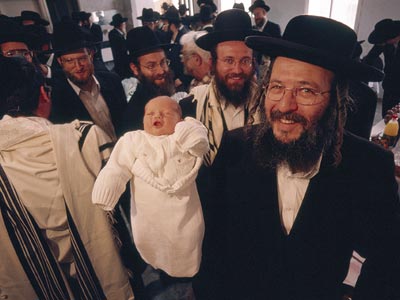 A Jewish man proudly shows off a boy after a circumcision in April 2001 in Jerusalem.
Reza/Getty Images

According to the Book of Genesis in the Torah, G­od made a covenant with Abraham (a Jewish patriarch) in which Abraham and his descendents would be given great lands, riches and success, but with one catch: Abraham, his descendants and any slaves purchased or born in his household must be circumcised by the eighth day of life. Not doing so would mean that the uncircumcised male would be separate from his people and live without the favor of God. The Jews have held up their end of the deal. Rates of circumcision remain high in Jewish men: about 98 percent of American Jews are circumcised [source: WHO].

In addition to his son Isaac, who would grow up to lead the Jewish people, Abraham also fathered a child with a slave woman in his household. This child, Ishmael, was circumcised according to God's demands but later cast out at the insistence of Abraham's son Isaac. Considered the forefather of the modern-day Arab people, Ishmael passed down the custom of circumcision to his ancestors, including the prophet Muhammad. When Muhammad's teachings were collected into the Quran, there was no directive regarding circumcision. Nonetheless, most Muslims do circumcise their sons for the simple reason that Muhammad was circumcised. Some Muslims circumcise their infant sons (traditionally by the seventh day of life), while other Muslim young men are circumcised around adolescence. Today, almost two out of every three circumcised men on the planet are Muslim [source: WHO].

Most Christian sects don't endorse circumcision, leaving the choice up to the family.

Other religions, such as Buddhism or Hinduism, don't have a stance on circumcision. Hindus, in fact, may not practice it simply because many people view it as an Islamic practice.

The history of circumcision has such a strong identification with Judaism that it's easy to think the practice got its start in the Torah, but it's believed that Jews were exposed to the custom by the ancient Egyptians, who practiced it for thousands of years before the birth of Christ. Regardless of whether the Jews taught the Egyptians or the Egyptians taught the Jews, people all over the world who had no contact with either group were practicing circumcision.

Both the Mayans and the Aztecs circumcised their male children and the practice has occurred for time immemorial by the native peoples of Australia, parts of Africa, Asia and the Americas. Ancient historian Herodotus mentioned in his writings that circumcision was practiced by Colchians, an ancient people who lived in what is now modern-day Georgia [source: Tierney].

Circumcision for medical purposes seems to have -- in modern times at least -- come into vogue in the 19th century as doctors began treating adult phimosis, although there are indications that the procedure might have been performed much earlier to prevent or treat venereal diseases [source: Dunsmuir].

In the late 19th and early 20th centuries, doctors began performing circumcisions more often, and now with anesthesia. (This isn't to say that all previous operations through history have been performed with an entirely sober and fully cognizant adult patient.) As with various patent medicines and medical beliefs of the time, circumcision was seen by some as a cure for a range of ailments, from impotence to homosexuality.

Before too long, it became a very common practice in the areas that adopted the custom. Next, we'll look at some of the customs and the people of the world who practice circumcision.

Whodunit? The Case of the Missing Foreskin

Before trained mohels took over, Jewish mothers once circumcised their own children. The Jews likely learned the practice from the Ancient Egyptians who themselves were circumcised by a priest using his gold-adorned thumbnail. In ancient Turkey, barbers -- who also performed bloodlettings and amputations in the latter Middle Ages -- performed the operation [source: Dunsmuir].