With approximately 1 billion followers, Hinduism is the third-largest religion in the world. Hinduism was born in ancient India (modern day India, Pakistan and Bangladesh) more than 5,000 years ago, and 90 percent of today's Hindus still live in the Indian subcontinent. In the United States, Hindus make up 0.7 percent of the population (2 million), roughly the same as Buddhists and slightly fewer than Muslims.

Yet many Americans and other Westerners remain ignorant of even the most basic tenets and practices of Hinduism. Are Hindus polytheistic? Are they all vegetarians? Do they have their own holy scriptures and places of worship? Do they worship cows?

Here's a chance to dispel some of the most pernicious myths about Hinduism, and to learn more about a rich and profound religious tradition that recognizes the divine nature of all creation and invites everyone, regardless of one's religious background, to walk their own path of righteous living.

We'd like to thank Suhag Shukla, executive director and co-founder of the Hindu American Foundation, for her generous help in answering our 10 big questions about Hinduism. 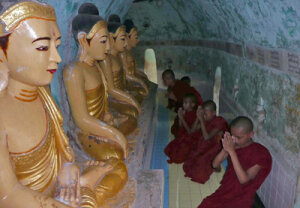