Circumcision Trends Around the Globe 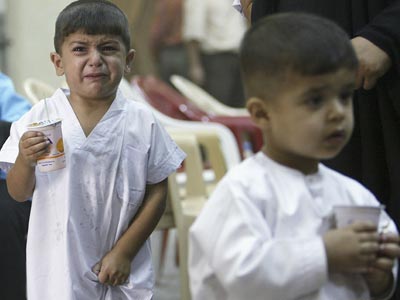 An Iraqi child cries as he stands in line to be circumcised July 14, 2005 in Baghdad.
Muhannad Fala'ah/Getty Images

Circumcision rites and procedures vary around the globe. Jews traditionally circumcise on the eighth day of a boy's life. In Egypt the procedure takes place generally anytime from birth to around 8 years of age. Malaysians prefer to circumcise when the boy is between 10 and 12 years old.

In some Muslim communities, circumcisions are performed once the boy has recited the entire Quran once, making the event a rite of passage. In other parts of the world, however, Muslims may not circumcise at all, or do so at infancy, because of long-standing tribal traditions.

Customs vary in Africa across regions, countries and tribes. Some communities circumcise at birth, while others arrange a large ceremony and treat it as a coming-of-age event. Some parts of Africa aren't frequented by trained circumcisers, so often a villager will perform the procedure, which increases the rate of infection. When a trained circumciser does travel through remote areas of Africa, it's not uncommon for a family to produce boys of many different ages to be circumcised.

The rate of circumcision is high in the Middle East and Central Asia. Countries throughout Asia that don't have large Muslim populations don't tend to practice circumcision, except in South Korea and the Philippines [source: Dunsmuir]. In South Korea, circumcision wasn't practiced until the latter half of the 20th century; some believe it's a direct result of the Koreans' proximity to American service members who were stationed throughout the country, many of whom were circumcised.

Hispanics are less likely than non-Hispanics to circumcise male children. The greater concentration of Hispanics in the West over the last 30 years is believed to be responsible for the regional decline in circumcision.

Falling rates of circumcision in the United States may also be related to the back-and-forth of private insurers and especially Medicaid over whether or not the procedure is covered. Insurance companies have an interest in seeing circumcision fall out of fashion. Though the cost is included in total billing for hospital births, circumcisions cost around $200. That doesn't seem like too much money, until you consider that of the 2.1 million males born in the United States in 2005, 1.2 million of them were circumcised [source: Merrill]

Next up: the big show.

Don't Forget to Tip the Mohel

Mohels are medically trained rabbis who perform circumcisions. The circumcision ceremony, known known as a brit milah or bris, can go one of two ways: The mohel may perform the entire procedure before guests or perform the procedure out of sight (in a hospital operating room, for example) and produce the circumcised infant afterward for the naming and blessing ceremony.