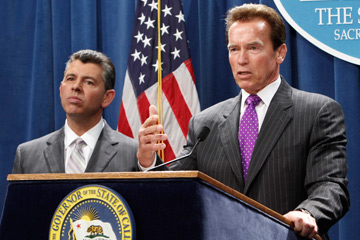 One of the U.S. Constitution's most important amendments is the 10th Amendment, the one that defines federalism. That's a fancy word that simply means that powers not granted by the federal government are reserved to the states. In effect, it establishes the sovereignty of state governments.

This is an important law because as powerful as the federal government is, it can't be expected to meet the needs of every place in America. New York has different problems, populations and issues than Alaska or Texas, for example. For this reason, a state government plays a big role in making sure citizens' needs are met, and that their voices are heard in the decision-making process. Each state also has its own specific laws and statutes.

Like the federal government, state governments are divided into different branches, including legislative and executive branches. The head of each state's executive branch is its governor, a position elected by the people within his or her state.

Governors' responsibilities, powers, and even terms vary widely from state to state. Nonetheless, they maintain a strong role in local government and local politics, often through appointments of judges and government officials, in guiding and signing (or vetoing) legislation and pushing various policies and initiatives.

As executives, governors are also important because many of them use the position as a platform to achieve higher office. Several presidents were governors at some time before their elections, including George W. Bush, Bill Clinton, Ronald Reagan and others. Sarah Palin was Alaska's governor while she ran for vice president in 2008, and current New Mexico Gov. Bill Richardson was a candidate for the Democratic presidential nomination that same year.

In this article, we'll look at what the 50 men and women who run our states actually do, examine the history of the position and learn how they work to shape the lives of citizens in their states.