Why is a buckeye seed in your pocket good luck? 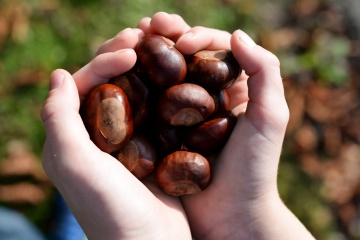 If just one buckeye is good luck, imagine what this many could get you.
© Frank May/dpa/Corbis

Americans, quick — can you name your state tree? Most of us can't, off the top of our heads. If you live in Ohio, however, we bet you knew the answer immediately. The buckeye tree is the official state tree of Ohio, adopted on Oct. 2, 1953. Further, we call Ohio "The Buckeye State," and the buckeye nut is the mascot for Ohio State University. Why is the buckeye so important to Ohioans?

As the tale goes, Ohio's nickname stems from General William Harrison's 1840 presidential campaign. His buckeye-log cabin west of Cincinnati, decorated with a string of buckeyes, became the symbol of his run and even part of his campaign song. Part of the lyrics went as follows:

"Oh what, tell me what is to be your cabin's fate?

We'll wheel it to the capital and place it there elate,

for a token and a sign of the bonnie Buckeye state."

What else makes the buckeye so special? According to legend, the buckeye is a powerful good luck charm. Let's take a closer look at this seed of good fortune and its story.

The nut, or seed, of the buckeye tree (native to the Ohio area) remains on the tree in a spiny shell until it ripens in autumn, when it's released from the hull and falls to the ground. About the size of a prune, a buckeye seed resembles a chestnut with a light circle in the center. It's this circle that Native Americans believed looked like a male deer's eye — hence the name "buckeye." But beware: Even though buckeyes look like chestnuts, they're slightly toxic and really shouldn't be eaten.

In the early 19th century, the Germans and Dutch believed the horse chestnut (very similar in appearance to the buckeye) held special powers, including a cure for headaches, rheumatism, arthritis and decreased libido. Superstition experts think immigrants to North America transferred these beliefs over to the similar-looking buckeye, and the legend just stuck.

Why carry it in your pocket? Convenience, maybe. You can simply reach into your pocket and rub it or twirl it between your fingers for good luck. If you lose it, there's usually another one lying around somewhere.

Except perhaps in the summer of 2014, when a gaming commission started running a commercial advertising the lucky qualities of buckeyes. A casino bought 5,000 buckeyes to give away to gamblers and ended up purchasing 40,000 before running out. The promotion actually caused a buckeye shortage in the area [source: WLWT5]. One gentleman reported taking a buckeye seed on a trip to a casino and winning more than $3,000. Coincidence, or the fortune of the buckeye? Give it a try — and let us know how it works out!