Is it bad luck to give knives as a gift? 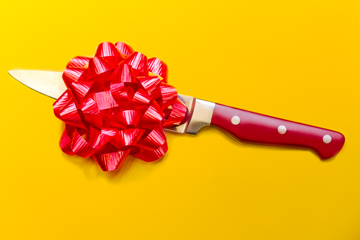 Gah! That knife doesn't have a penny taped to it. Is the recipient doomed?
© D. Fagan/HowStuffWorks

Sometimes it's difficult to find the perfect gift for a friend. You wrack your brain, trying to come up with a thoughtful gift that will be appreciated and defy the cookie-cutter mold. Better still? The gift will be affordable, too.

Enter the knife. A knife is a timeless and useful gift. A knife or a set of knives can be engraved, intricately tooled and selected to fit the receiver. There are knives for outdoor enthusiasts, culinary aficionados and survivalists for any number of occasions, ranging from birthdays to weddings and anniversaries. Before you give one, however, there's something you need to know: Gifting knives has long been considered bad luck.

According to one superstition, a knife presented as a gift will sever the friendship between the giver and the recipient. The only way around this unfortunate outcome is to tape a penny to the knife. The coin must be promptly removed and returned to the giver as a form of symbolic payment. This transaction prevents the relationship from being cut and, because the knife was "purchased," releases the giver from any injuries that might result from its use.

Knife-giving superstitions are prevalent the world over, and many beliefs surround sharp objects. It's especially bad luck to give a knife as a wedding gift because, according to folklore, it could cut the marriage ties. For similar reasons, a pocketknife should be handed to someone only if it's closed. Otherwise, it'll cause an argument. If there's been a death in the family, superstition insists that knives should be carefully handled. This way, family members can avoid stabbing the soul of the dead.

If all this superstition makes you hesitant to give a knife as a gift, consider this: Keeping a knife in a jar of water by the front and back doors of a home is believed to ward off evil spirits -- apparently, they're afraid of their reflections in the water and on the knife's surface. So maybe the gift of a knife isn't so bad after all.