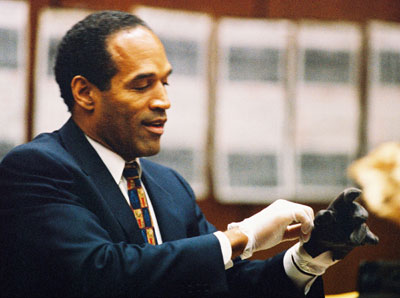 O.J. Simpson tries on a leather glove allegedly used in the murders of Nicole Brown Simpson and Ronald Goldman during testimony in his murder trial June 15, 1995, in Los Angeles.
Lee Celano/WireImage

The murder case of former Heisman Trophy winner and star NFL fullback O.J. Simpson captivated U.S. audiences for months. It began with the televised police chase of Simpson in a white Ford Bronco through Los Angeles roads on June 17, 1994.

Simpson married Nicole Brown in 1985, but the couple split in 1992. On June 11, 1994, Simpson and Brown attended their daughter's play in Los Angeles and then parted ways. Brown went to dinner with friends, and Simpson left to pack for a flight to Chicago scheduled later that night. The next morning, neighbors found Nicole Brown and her friend Ron Goldman murdered outside of Brown's Los Angeles condo.

Evidence seemed to point in Simpson's direction. For instance, the limo driver who picked Simpson up to take him to the airport the night of the murder testified that when he arrived at the house and rang the doorbell, no one answered. While waiting, the driver then saw a large black person in dark clothes enter Simpson's house. Minutes later, Simpson answered the door. Blood was also found in some of Simpson's belongings, including his white Ford Bronco and a pair of socks.

The trial began on Jan. 24, 1995, after Simpson pled not guilty to the two murders. His defense team was led by Johnnie Cochran, who turned the focus of the trial proceedings to alleged racism of the lead police detective in the case. Since the jury was majority-black, some felt that Cochran manipulated the race issue as a ploy to gain their sympathies. After more than four months of court proceedings, the jury acquitted Simpson ­of both counts of murder.

­In light of the evidence, many questioned the jury's decision. And, in the wrongful death civil suit brought by the Brown and Goldman families soon after, Simpson was found liable.