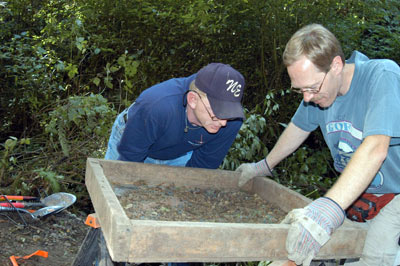 Investigators search for the remains of a victim of Gary Ridgway, the Green River Killer.
King County Prosecutor's Office/Getty Images

A serial killer keeps killing until one of four things happens: he is caught, he dies, he kills himself or he burns out. Obviously once law enforcement determines that a string of murders can be attributed to one person, the goal is to catch him as soon as possible. But how do they figure this out? And how are serial killers caught?

­In the aftermath of any homicide, inv­estigating the crime scene and performing an autopsy are routine steps that law enforcement takes in an attempt to solve the crime. Once all of this information has been collected, it can be entered into a nationwide database run by the FBI, as part of ViCAP (Violent Criminal Apprehension Program). This program can help to determine patterns, or signatures, that link separate homicides.

According to FBI profiler John Douglas, a signature "is a ritual, something the subject does intentionally for emotional satisfaction -- something that isn't necessary to perpetuate the crime” [source: JohnDouglas.com]. Some serial killers pose their victims in a certain way or leave them in a certain place after killing them. Another signature might be a method of torture or mutilation. It's what the killer does to fulfill his fantasies, and it can tell investigators a lot about his personality.

Investigators also look at the MO, or modus operandi, of the crime. The MO reflects what the killer had to do to commit the crime. This includes everything from luring and restraining his victim to the way that he actually murders her. A serial killer's MO can change over time. Essentially, he learns from past mistakes and improves with time.