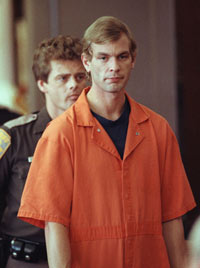 Jeffrey Dahmer at his trial in 1991. He killed at least 17 men and boys.
Eugene Garcia/AFP/Getty Images

One of the most studied aspects of serial murder is “why?” A number of theories have been set forth as potential explanations. But “unraveling the making of a serial killer is like aligning a Rubik's cube” [source: Vronsky]. In other words, there is no one answer. Let's take a look at three possible theories: childhood neglect and abuse, mental illness and brain injury.

One theory centers around the neglect and abuse that many serial killers experience as children. Robert Ressler and Tom Shachtman describe a study conducted by the FBI, which included interviews with dozens of murderers (mostly serial killers). In each case, they found “similar patterns of severe childhood neglect” [source: Ressler & Shachtman]. During a child's development, there are important periods in which he learns about love, trust, empathy and basic rules about how to interact with other human beings. If these traits aren't imprinted upon the child during that period, it may not be possible for him to learn them later in life.

Serial killers were often physically or sexually abused as children or witnessed the abuse of family members. This pattern of neglect and abuse, some researchers say, leads serial killers to grow up without a sense of anyone other than themselves. But at the same time, many children grow up neglected and abused, but do not become violent criminals or serial killers.

On the next page we'll learn about mental illness and brain injury in serial killers.