Browse the article How Riots Work 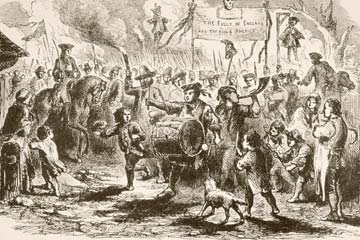 Riots have a long history in the United States. This print shows colonists rioting after the British Parliament passed the Stamp Act in 1765. See more pictures of protests.
Universal Images Group/Hulton Archive/Getty Images

Martin Luther King Jr. once said "A riot is the language of the unheard." Indeed, when we see a riot on the news, we are likely viewing a group of people who feel frustrated and oppressed, who feel that the only way to make the people in charge pay attention is to leave a physical mark on the community. How can you ignore a group of people overturning cars, looting stores and fighting police officers? These actions are probably intended to force authorities to consider the decisions they've made or the situations they've created that have left the rioters so angry and destructive.

However, in another speech, King made this observation: "The limitation of riots, moral questions aside, is that they cannot win and their participants know it. Hence, rioting is not revolutionary but reactionary because it invites defeat. It involves an emotional catharsis, but it must be followed by a sense of futility." Squeaky wheels may get the grease, but if you drive a car with a wheel that constantly drives off the road in an effort to destroy you, you'll eventually get rid of the wheel altogether. That's why King preferred means of nonviolence to push for social change. Protests, demonstrations and peaceful assemblies are protected by the U.S. Constitution, but when three or more people get together to destroy property or hurt people, then they're in legal trouble.

Riot is a legal term that involves a disturbance of the peace; it's distinguished from lawful assemblies by the violence that occurs. As King said, they can be cathartic events for people who feel that they need to make a point to authorities who aren't hearing them. However, more often than not, they're unsuccessful, as King also pointed out. So why do riots occur? How do they start? Who participates in them? And is there any good way to end or prevent them?

Causes and Triggers of Riots 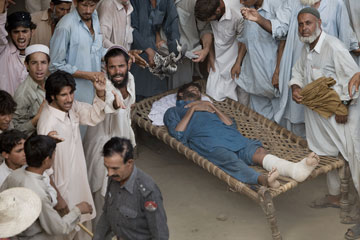 An angry mob gathers around a man beaten by Pakistani police. The man had asked for food rations in the midst of a food shortage.
Daniel Berehulak/Getty Images

Riots differ from lawful protests or demonstrations because of the violence that ensues. They also differ from these events in that they're more chaotic and disorganized. While you may receive an invite to a protest or spend hours planning an effective assembly, riots are more akin to massive mind melds between individuals.

The people who participate in a riot may have never met one another before, but they're likely all linked by an underlying social problem or complaint. Poverty and race form the bedrock of many riots. People who lack economic opportunity often participate in a riot because they have nothing to lose by doing so, whereas middle- and upper-class people tend to stay away from these violent events that could sully their livelihood. Race becomes an issue when a particular ethnicity feels that they're always singled out for punishment or when a different ethnicity encroaches on their perceived turf. With both social issues, the affected people likely feel that they're not getting a fair shake from the government.

People can feel that way and not act on it, though. When you ride public transportation, the other people on your bus or your train may be angry at the government, their employer or just anyone who is different from them. But they don't turn the bus into a danger zone, and many protests and demonstrations gather like-minded individuals eager for change without incident. What provokes aggrieved people to turn violent? While riots may be due to underlying social issues, there is usually a specific trigger that converts rage into action.

Past triggers have included assassinations (riots raged for days after Martin Luther King Jr. was shot) and unpopular jury verdicts (the 1992 riots in Los Angeles started after a jury acquitted police officers caught on tape beating Rodney King). Triggers tend to be acts of authority deemed outrageously unfair or acts in which it seems that authority has failed, such as a rigged election, a corrupt jury or a labor boss ignoring federal safety standards. Even a rumor of such a thing can spur people to act. Sporting events tend to cause riots after both good and bad outcomes for one's particular team, but by and large, riots are fueled by a sense of injustice.

When that trigger occurs, that's when the mind-reading begins. People must recognize the trigger as an event that will galvanize others, and they must also know where to meet their fellow citizens and when to begin rioting. We'll examine this mass telepathy on the next page. 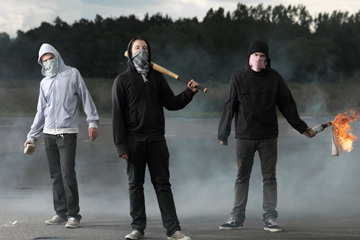 Who will cast the first stone?
Cultura/jf/StockImage/Getty Images

A leader doesn't create a riot; rather, riots create leaders. That means you probably won't find someone who plotted the course of a riot for days in his basement, or hear someone order everyone else to start overturning cars. Riots lack organization and it's too risky for anyone to take charge of beginning the riot. Instead, intuition guides individual rioters, who then become captive to a mob mentality.

Let's say a riot trigger has occurred -- more importantly, let's say that this event took place on a sunny afternoon, as riots rarely occur in the morning or in bad weather [source: Heal]. Riots also tend to happen in urban areas as opposed to rural ones, and they're usually made up of younger people as opposed to older people [source: Heal]. Perhaps it's the urban setting that makes it easier for crowds of people to spontaneously gather in one place after a riot trigger, as there are landmarks and notable neighborhoods. In one study, people were asked where they would go to meet someone if they were unable to set a meeting place ahead of time; most people tend to pick out the same landmarks over and over, indicating that we might possess a certain ability to coordinate with people we've never met [source: Haddock, Polsby]. Of course, knowing where to join a riot in progress is much easier, as television news reports and social media can indicate where the action is.

As people begin to gather, they evaluate each other -- is this person on my side? Are there enough of us to outnumber a police force? Are there witnesses that would turn us in? If I throw a rock in a window, will these people join me? That last question is crucial, as it's foolish to risk arrest if no one will join you. But once there are enough people (subtly communicating their desire to wreak havoc), then someone will be brave enough to start the violence. Throwing a rock through a window is a preferred way of doing this, as it creates a sound that can be heard by many, even if it isn't seen [source: Haddock, Polsby].

It takes a certain amount of emotional intelligence for a person to be able to predict and read so many strangers' behavior. Once the violence begins, however, the individual becomes part of the group, and groups can make people do things they wouldn't normally do alone. We'll consider the psychology of mobs on the next page. 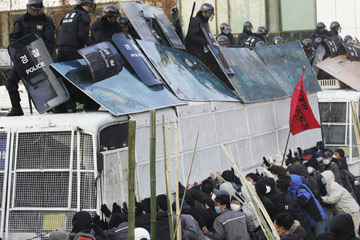 When a group of people has assembled because they're emotional and angry about something, it only takes one act of violence to whip the crowd into a fury. Others will follow the initial rioter's lead and begin destroying property or hurting people. A lot of research has been conducted into the mindset of a violent mob. Being part of a group can destroy people's inhibitions, making them do things they'd never otherwise do. They lose their individual values and principles and adopt the group's principles, which, during a riot, are usually to cause destruction and avoid detection. This standard can seem to be a just and righteous one, since the mobs assembled after an act of perceived inequality or unfairness, and the communal emotion can make the cause seem even more important. Being in the midst of a mob can be exciting and powerful, and it can make people feel invisible -- they are part of a huge group, and they won't be detected or held responsible for their actions.

This research may help to explain why so many riots occur in prison and at sporting events. In these situations, there is already a heightened sense of group solidarity -- everyone is wearing the same thing (either a jumpsuit or team colors) and has the same goal (in the case of prisoners, freedom or better living conditions in the jail might be the goal, while sports fans are obviously hoping for a win or disappointed in a loss). When you consider the fact that alcohol is consumed at sports events, the atmosphere seems even more ripe for a mob to become disruptive.

The longer a riot continues, however, the harder it may be to find people who remember why everyone assembled in the first place. While participants feel their actions are justified, they may not be able to articulate the specific act that motivated the riot, and often as a result, damage is done to property or people that can't even be tied to the riot's trigger. Some people will show up simply to loot the damaged businesses and homes. Many of the victims of riot violence did nothing to deserve their fate other than being in the wrong place at the wrong time.

So how can dangerous mobs be stopped? We'll explore riot control tactics on the next page.

Breaking Up and Preventing Riots 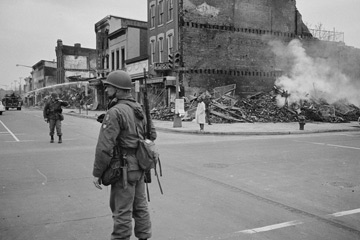 While mobs are powerful and wreak intense havoc in a short period of time, they are hard to sustain. Though people feel intense allegiance to them for short periods of time, at heart, the connections between rioters are tenuous and temporary. That's why many riot control tactics employed by police rely on intimidation, rather than actual violence.

Often, the threat of arrest will be enough to break the spell of the mob and cause people to disperse. Rioters tend not to be armed with anything other than what they found at the riot site, so officers with guns, rubber bullets, horses or dogs will be sufficient. Police officers may also use water hoses or odious gases and sprays to deal with stubborn rioters, and of course, some resort to brutal beatings to restore order. During the Arab Spring of 2011, when protests and riots spread throughout the Middle East, participants circulated handbooks that taught their fellow protestors how to withstand such attacks. Law enforcement officials don't attempt to apprehend every single rioter, but they will want to make sure that any leaders who emerged in the course of rioting are effectively subdued, which may require arrest and prosecution.

Once a riot ends, authorities typically see destruction and damage -- not an impetus to change their actions. Only rarely do participants effect social change or gain concessions after their violent outbursts, which may be why riots remain relatively rare. But will we ever be able to prevent them altogether? Governments could use censorship of the media so that riot triggers aren't publicized, but such behavior is unlikely to be tolerated in a democracy. Increasing police forces so that mobs don't have time to whip themselves into a frenzy before enforcement arrives would be helpful, but expensive. Social media could play a role; though the technology does make it easier for would-be rioters to find a place to go, it may also be an effective deterrent as lawyers and officials identify people to arrest and prosecute from pictures and messages. Unfortunately, these measures don't address the underlying issues of class and race that provide the fuel for riots. Perhaps when no one feels unjustly treated, we'll have an end to riots. Of course, then we'll have the flying pigs to deal with.