Protest in Stories, Art and Graffiti 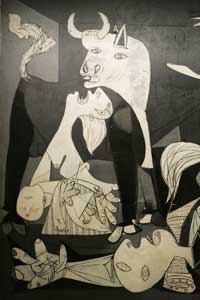 Picasso's mural "Guernica" was his depiction of the Nazi German bombing of Guernica during the Spanish Civil War.­
AP Photo/Paul White

­A­­n­tiwar stories have existed throughout human history. The ancien­t Greek play Lysistrata, for instance, told the story of a group of women who protested war by withholding sex from their warrior husbands. Storytelling has long glamorized war, but it also frequently reminds the listener, reader or moviegoer of war's horrors. The same can be said of art, such as Pablo Picasso's mural "Guernica," which he painted as a form of visual protest to Spain's brutal civil war.

Literature has long played a role in protest. The ancient Greek poet Alcaeus crafted the equivalent of protest poetry dealing with the plight of the poor during sixth century B.C. The invention of the printing press in 1440 made a huge impact since it allowed for the mass production of literature. Protest tracts, newspapers and pamphlets followed in its wake, making such influential protest literature as Upton Sinclair's 1906 meatpacking industry exposé "The Jungle" possible.

While often blurring the lines between artistic expression and vandalism, graffiti has also provided protesters with a forum for their message. From words hastily scrawled on walls to epic public murals, graffiti allows for anonymous, free publication -- at least until someone scrubs it away. Graffiti marked the walls of ancient Rome thousands of years ago and famously covered the western side of the Berlin Wall in opposition to the post-war separation of East and West Germany.

While modern graffiti artists haven't abandoned their spray cans, the Internet has become a popular venue for the craft as well. While there are no shortage of activist Web sites, message boards and online petitions, hackers occasionally ply their craft as a means of protest. Tens of thousands of Web sites were hacked with antiwar messages following the war in Iraq [source: BBC].

In 2008, a group of Internet activists calling themselves Anonymous targeted the Church of Scientology, accusing the religious organization of suppressing free speech. Among the tactics they employed were temporarily disabling the international Scientology Web site and "Google Bombing" them, so that the church would pop up as the No. 1 search result for "dangerous cult" [source: Barkham].

Of course, all of these protest methods raise one crucial question: Do they work?